Tillerson Visits Russia Amid Tension Over US Missile Strike In Syria 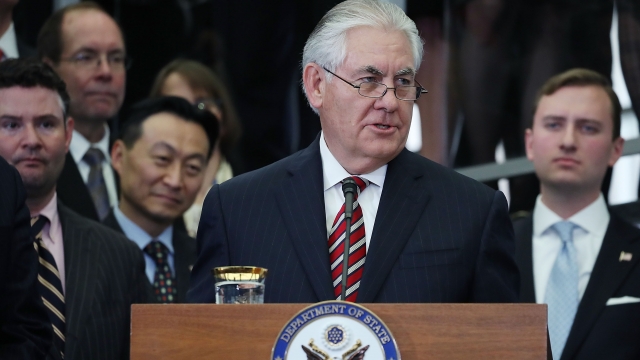 Secretary of State Rex Tillerson is in Russia only days after U.S. missiles hit an air base in Syria. Russia is an ally to the Syrian regime.

Rex Tillerson's first official visit to Russia as secretary of state could not have come at a more awkward time.

The United States' recent missiles strike against Syrian President Bashar al-Assad was in retaliation for the regime's chemical weapons attack that killed dozens of its citizens, including women and children.

The strike angered Russian President Vladimir Putin, who considers Assad an ally. He called it "an act of aggression against a sovereign state delivered in violation of international law under a far-fetched pretext."

On Monday, Tillerson met with G-7 foreign ministers in Italy to talk about Syria and similar conflicts, like in Ukraine and Iraq.

Before the strikes, Russia and the U.S. communicated to conduct strikes against terrorist groups. Now, that cooperation is up in the air.

Rex Tillerson gave one reporter from the Independent Journal Review a rare interview about his role as secretary of state.

Officially, Russia says it's in Syria to fight ISIS. But critics argue Putin's continued presence is more about suppressing those who oppose Assad than it is about fighting terrorism.

Tillerson refused to speculate and said the only way to know Russia's level of involvement in the gas attack was to ask during his visit.