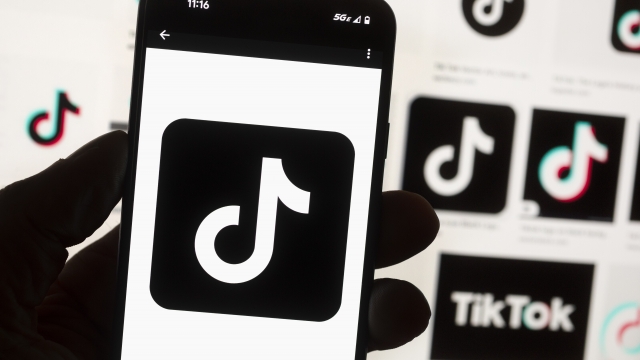 Americans who were previously employed by intelligence agencies are now working for TikTok, and it is raising security concerns.

The U.S. intelligence community sees China as its top threat. But Americans who have left intelligence agencies are getting jobs at TikTok, which is owned by Chinese company ByteDance.

Larry Pfeiffer is the former chief of staff for the Central Intelligence Agency.

"I was definitely concerned or maybe borderline alarmed," said Pfeiffer.

There's plenty more in public view. A government website confirmed that an NSA target analyst "landed a job at TikTok."

Other staff have backgrounds in the U.S. Cyber Command, Pacific Command, and State Department. They generally work in TikTok investigations, threat analysis, and law enforcement outreach.

Lindsay Gorman was the former senior adviser for technology strategy for the White House. Until April, he advised the White House on tech competition between the U.S. and China. She said these hires give TikTok a stamp of legitimacy.

"On the one hand, this is a normal reaction to a growth of a company. As social media companies have scaled, they've hired threat intelligence analysts … Google, Facebook, Twitter have all done that. And a popular talent pool for these companies is former law enforcement and intelligence officials," Gorman said. "On the other hand, though, we can't ignore the fact that these concerns about TikTok's Chinese parent ownership have not been resolved."

She said the lines between business and government get blurred in China, in part because of Beijing's national intelligence law, which compels citizens and businesses to share information with state intelligence-gathering efforts, if asked.

"The ultimate question is, is this a strategic decision on the part of TikTok, ByteDance or — God help us, the Chinese government — you know, is there instruction out there, 'go hire these people in order to help us influence this negativity we're hearing from the U.S. government about our platform so we can then use this platform to then exploit and get information that we want to get about Americans?'" said Pfeiffer.

Former senior intelligence officials told Newsy their colleagues could become unwitting accomplices to China's intelligence services. Their old skills, like mapping networks of terrorists, could potentially be used to target China's critics and opponents. This comes after a researcher said TikTok can track every keystroke that users make.

"It's absolutely possible that TikTok or its parent company, ByteDance, could be monitoring and collecting keystroke and other data from their former U.S. intelligence employees and then learning how they do their jobs. Could it be done more subtly through investigations of the employee's backgrounds, through idle chit-chat in the office? Any of the classic ways in which an intelligence service can get information from individuals," said Pfeiffer.

A TikTok spokesperson told Newsy, "that's a fantastical and unsubstantiated hypothesis," and downplayed ties to China. The spokesperson also said the platform would be irresponsible not to hire people with expertise in issues like counterterrorism and covert influence.

But fears persist that the private data of U.S.-based TikTok users — their search histories, biometrics, interests, and vulnerabilities — can be accessed and exploited in Beijing.

To defend the company, a TikTok executive invoked the CIA.

TikTok has been under scrutiny since a social media company claimed the app was collecting data from Americans and giving China access to U.S. info.

"As actual national security agencies like the CIA during the Trump administration pointed out, the data that's available on TikTok, because it's an entertainment app, is not of national security importance," said Michael Beckerman,  the head of Tiktok Americas.

Numerous government agencies don't allow TikTok on their employees' devices. And the FBI is sounding alarms on the Chinese government's activities in the U.S.

"When I last looked, we were opening a new China counterintelligence investigation about every 12 hours. And it's about a 1300% increase from several years ago," said Chris Wray, the FBI director.

Three national security lawyers told Newsy that just taking a job at TikTok after government work isn't illegal. But Newsy learned of a 2021 memo that the director of the CIA's Counterintelligence Mission Center sent to former officers. The general warning said, "another detrimental trend we are seeing is foreign governments, either directly or indirectly, hiring former intelligence officials to build up their spying capabilities. I can't mince words. Former CIA officers who pursue this type of employment are engaging in activity that may undermine the agency's mission to the benefit of U.S. competitors and foreign adversaries."

The CIA and FBI asked Newsy for the names we found of TikTok employees, but then declined to comment. Doug Wise, a former member of the CIA's Senior Intelligence Service and number two at the Defense Intelligence Agency, believes that's because the agencies think it's improper to criticize anyone by name.

He says America's freedoms give China an advantage.