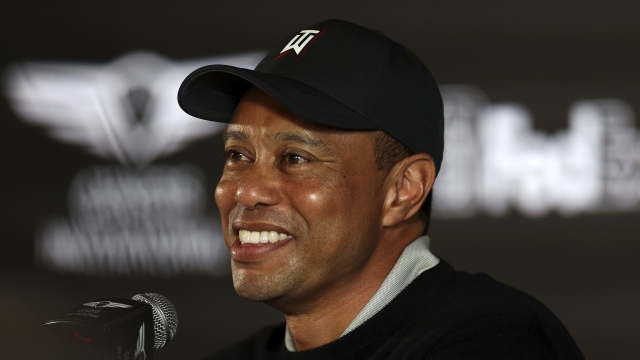 From a balcony on the clubhouse, Tiger Woods could see Riviera Country Club in all its glory Wednesday under a blue sky, a sliver of the Pacific Ocean visible over the tops of trees and below him a course reputed to be as good as any on the PGA Tour.

He's expecting the course to be firm and fast, with the plan for the greens to get increasingly difficult. And then he interrupted himself with a realization Woods has come to accept.

“Well,” he said with a smile, “I can't tell you guys the plan because I'm not playing.”

He is the tournament host of the Genesis Invitational, nothing more. And that's all he will be until his legs are healed enough from a harrowing car crash a year ago about 20 miles away from Riviera in Los Angeles

At best, Woods figures he would only be able to play a few events each year. But that starts with being able to compete while walking. Most frustrating is not knowing when that will be.

He said his golf has been limited since playing with his son two months ago in the PNC Championship, where he could ride in a cart.

“My leg was not in very good position there about a year ago and I’ve had to work through a lot of different operations and a lot of different scenarios,” Woods said Wednesday. “It’s been tough, but I’ve gotten here. I’ve gotten this far and I still have a long way to go. Each and every day’s a fight and I welcome that fight.”

It was the Tuesday after the Genesis Invitational last year when Woods was driving along a winding road in the Los Angeles suburbs. His SUV was going around 85 mph when it ran over the median and tumbled down a hill.

Bones were shattered in his right leg and foot, injuries so severe that Woods said doctors contemplated amputation at one point.

Woods inspired hope he could return when he played the PNC Championship with his son. He and Charlie finished one shot behind. Overlooked in the performance was Woods was in a cart on a flat Florida course.

“Being a weekend warrior is easy. That's not that hard,” Woods said. “Hit your ball, hop in a cart, ride, barely step out of the cart, grab your club and hit the next one. And the longest walk you have is probably from the cart to the green and back. But walking a golf course? That's a totally different deal.”

He also mentioned how difficult it was to get loose after his four back surgeries, a remarkable recovery made complete when he won the 2019 Masters for his 15th major. He was recovering from a fifth back surgery when he crashed his car.

Augusta National is the toughest walk of the four majors, and it would seem unlikely Woods will play. He didn't sound interested in playing the Par 3 tournament (a short walk, but still a walk), though he likely will be at the Masters for the champion's dinner.