Tiger Woods Practices At Augusta One Week Before Masters 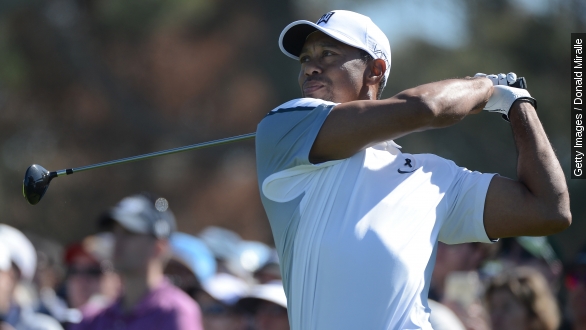 SMS
Tiger Woods Practices At Augusta One Week Before Masters
By Jay Strubberg
By Jay Strubberg
April 1, 2015
Augusta Chronicle reports Tiger hit the links for a practice round at Augusta National, site of the Masters Tournament — which is next week.
SHOW TRANSCRIPT

Well, it doesn't look like that break lasted very long.

Woods reportedly hit the links for a practice round of golf at Augusta National, site of the Masters Tournament — which just happens to be (what a coincidence) next week.

Woods has battled through ailing back problems and a string of poor performances recently. He shot a career worst 82 in the Phoenix Open earlier this year and missed the cut by 12 shots.

He's been slumping so much, he decided to take a hiatus from tournament play last month to "work on [his] game." That decision lead some to speculate his decision was centered more on the mental and less on the physical.

"There's a tendency when you're not playing well to go straight for the mechanics: must be my game, must be my putting, must be my feel. But you reach a point where you should be here first," Psychologist Jack Llewellyn said.

There, of course, has been tons of speculation over whether Woods will actually play in the Masters, and it's a potential return sports analysts are a bit divided on.

"I love Tiger Woods. He makes me watch golf. But he was so bad the last time that I saw him, I was embarrassed, so frustrated, it ruins my weekend," an ESPN analyst said.

"Well, you don't have to worry 'cause sometimes he doesn't make the weekend," Tony Kornheiser said.

Despite Woody Paige's enthusiasm, Monday, the 14-time major champion dropped out of golf's top 100 list for the first time since 1996.

Woods spent a record 683 weeks in the world's No. 1 spot, but he's currently ranked 104. Though one Golf Channel analyst says a stellar recent practice round shows Woods may be ready to return. (Video via Fox)

"The best example of the progress Tiger has made over the last two to three weeks was the 'worst ball' 66 he shot at medalist ball golf club. ... The course record he shot there: 62 in 2011. This round conceivably could be seen as better," Golf Channel's Tim Rosaforte said.

As for the Masters, Woods hasn't spoken up yet about whether he'll return.