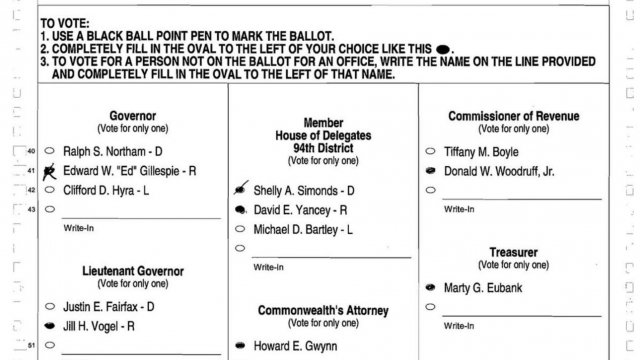 SMS
This One Ballot May Leave A Tied Virginia Race Up To Chance
By Casey Mendoza
By Casey Mendoza
December 20, 2017
As a result of the tie, the winner of the state delegate race could be chosen ... randomly.
SHOW TRANSCRIPT

A Virginia recount for state delegate was already really close — like, a single vote close — but one ballot may throw the race into even more contention.

On Wednesday, judges ruled that a previously rejected vote counts for Republican incumbent David Yancey. That means the election closes at a tie.

The ballot, however, has some issues. The voter filled in bubbles for both Shelly Simonds and David Yancey, but crossed out the bubble for Simonds. Judges assume that means the voter intended to vote for Yancey. But according to guidelines from the Virginia Department of Elections, ballots with two bubbles filled in are generally ruled void.

The Virginian-Pilot notes that ballot likely shouldn't have made it past the voting machine, but the recount is going forward with it anyway.

The race between Simonds and Yancey will now be decided ... randomly. The chairman of the state's board of elections told The Virginian-Pilot that a winner would likely be chosen after their name is drawn out of a bowl.

Whoever loses that way can seek a second recount.