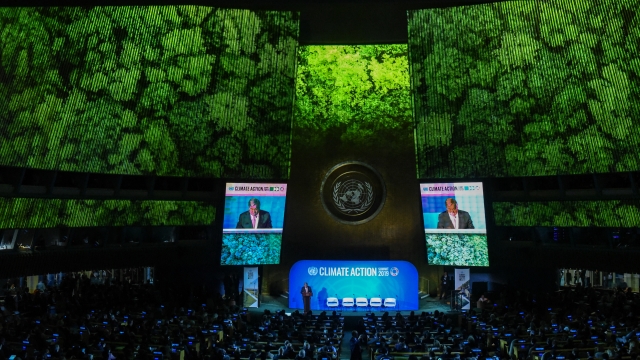 "Nature is angry. And we fool ourselves if we think we can fool nature, because nature always strikes back. And around the world, nature is striking back with fury."

The U.N. has called on world leaders to commit to reducing greenhouse gas emissions by 45% over the next decade and to reaching net-zero emissions by 2050. Earlier this year, the secretary general invited leaders to submit plans for fighting climate change.

The summit took place on the first day of the U.N. General Assembly and just days after thousands of demonstrators around the world participated in the youth-led Global Climate Strike, a rally inspired, in part, by teenage climate activist Greta Thunberg.

In her address Monday, the 16-year-old scolded world leaders for their inaction and "empty words" about climate change. She said she should be in school instead of at the Assembly.

She said: "People are suffering, people are dying. Entire ecosystems are collapsing. We are in the beginning of a mass extinction, and all you can talk about is money and fairy tales of eternal economic growth. How dare you."

Thunberg and 15 other children later filed a complaint with the U.N., accusing five of the world's major economies of violating their rights under the Convention on the Rights of the Child. They called out Germany, France, Brazil, Argentina and Turkey for what they called "inadequate" pledges to reduce greenhouse emissions.

Although a number of countries are falling short of the targets outlined by the landmark 2015 Paris climate agreement, many world leaders at the summit commented on their efforts to combat climate change.

French President  Emmanuel Macron said heads of state need to uphold the Paris agreement and that countries should move toward carbon neutrality by 2050. He also applauded the efforts of young people like Thunberg in raising awareness of the climate crisis.

He said: "We need our young people in our countries to tell us to work faster. We need the young people to help us to change things."

China is also a major proponent of coal-fired plants, despite pressure to curb development. Chinese Foreign Minister Wang Yi said his country was meeting its targets under the Paris agreement and took a shot at at the U.S., which withdrew from the accord.

President Trump made a brief appearance at the summit, telling reporters that he was a "big believer in clean air and clean water." President Trump is skeptical of climate change and renewable energy. He skipped a discussion about climate and biodiversity at the G-7 Summit back in August.