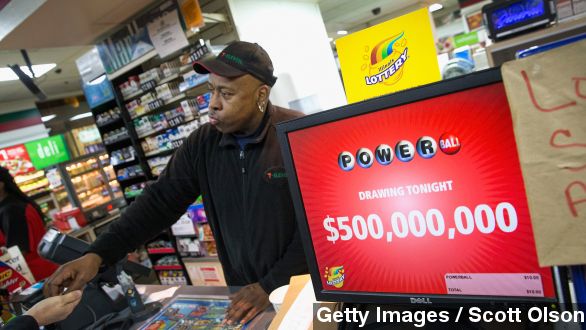 Less than a year after joining Powerball, Puerto Rico has drawn a winner.

The U.S. commonwealth joined Texas and North Carolina in selling the winning tickets. It's the first time a winning ticket has been sold outside the U.S. (Video via Lotería Electrónica)

The three winners, if they so choose, could be splitting a one-time payment of a little more than $381 million, before taxes — just under 70 percent of the estimated jackpot of $564 million.

Because nobody had won the jackpot since November, the prize pool had been building for a while, as had anticipation for the drawing.

It was the biggest jackpot since December of 2013, and accordingly, gas stations and lottery stores saw long lines of hopefuls, with the Multi-State Lottery Association telling ABC 75,000 tickets were being sold every minute. (Video via ABC)

With that kind of turnout, you wouldn't expect that lottery ticket sales have seen a slowdown since 2013, but they have — and it's been affecting state budgets. (Video via KSHB)

The Wall Street Journal's Ben Leubsdorf told PBS, "44 states rely on lottery revenue as part of their revenue picture ... they rely on this money in order to, in many cases pay for education, or other expenses."

When the jackpots fall below eye-grabbing numbers like 546 million, fewer people are drawn in to play, so a continued streak of big jackpots would benefit those 44 participating states, as well as Washington D.C., Puerto Rico and the U.S. Virgin Islands. (Video via WFTS)

The cities that sold the winning tickets have yet to be announced.