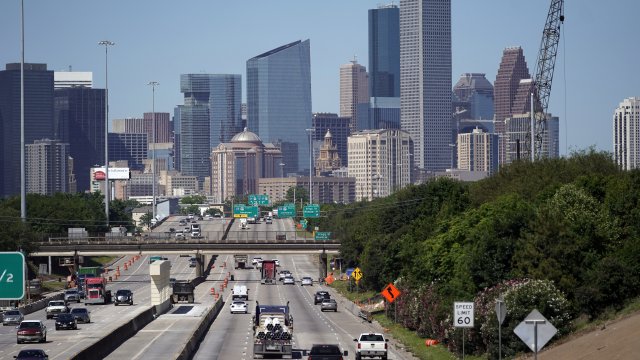 SMS
Police: Suspect In Custody After Wounding 3 Houston Officers
By Newsy Staff
By Newsy Staff
January 27, 2022
All three of the injured officers were in stable condition after being taken to Memorial Hermann Hospital.

A suspect led Houston police on a chase Thursday that ended with him wounding three officers in a shootout, stealing a car and barricading himself inside a home for hours before officers took him into custody, authorities said.

The incident began about 2:40 p.m. as officers responded to a family disturbance call at a home in northeast Houston, Police Chief Troy Finner said at a news conference.

All three injured officers were in stable condition after being taken to Memorial Hermann Hospital. Two officers were transported by another patrol officer’s vehicle while the Houston Fire Department took the third.

“We are just grateful to God they are all right,” Finner said.

Police had responded to a report of a shooting at the home of the suspect’s girlfriend, according to Griffith. When officers arrived, the suspect, whose name had not been released by authorities, fled in a vehicle and led police on a chase for several miles.

The chase ended when the suspect’s vehicle crashed at an intersection in a residential neighborhood just off Interstate 69 on the southeastern edge of downtown Houston.

“Officers, as they got out of vehicle, the suspect immediately fired upon officers, striking three officers. All the officers returned fire,” Finner said.

It was not known if the officers’ gunfire injured the suspect. Finner said it’s possible the suspect fired more than 50 rounds. Officers described the gun the suspect used as “a fully automatic weapon,” he said.

The suspect fled the scene and carjacked at gunpoint a white Mercedes, Finner said. He then drove to a home located several miles northeast of where the crash occurred.

Officers surrounded the home. The suspect fired multiple times but did not hit any of the officers, who returned fire, Finner said.

The suspect remained barricaded in the home until shortly after 7:30 p.m. Thursday, when officers took him into custody after hours of negotiations, according to Houston police. The suspect was believed to be the only person in the home. It was not immediately known why he went there, Finner said.

Mayor Sylvester Turner said he visited the wounded officers and found them talkative and in good spirits.

Turner said Thursday’s shooting highlighted the dangers law enforcement faces each day and the rising violent crime that has affected Houston and other U.S. cities the last couple of years.

Finner said it’s been “a tough week for law enforcement” in Houston. On Sunday, a Houston-area deputy constable was fatally shot during a traffic stop, and a Harris County Sheriff’s Office deputy was fatally struck by a vehicle early Monday as he stood by his motorcycle while blocking a Houston highway exit ramp during an off-duty job escorting heavy machinery.

Turner said that he and Finner planned to announce next week “some additional steps” the city will take to address rising crime in Houston.

“It’s going to take all of us working together to have a very safe city,” Turner said.