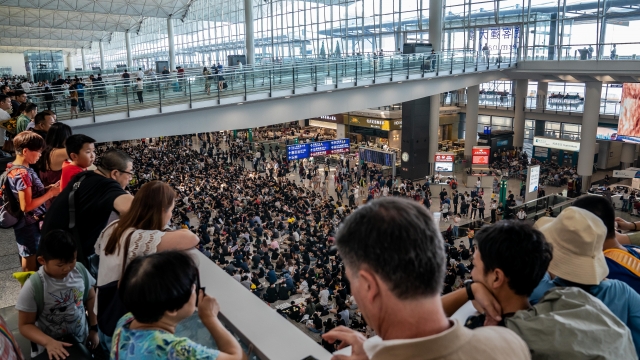 Demonstrators kicked off what's scheduled to be three days of protests at Hong Kong's international airport on Friday.

Videos of the rally show hundreds of protesters dressed in black sitting in the airport's large arrivals hall. They're waving banners and signs and handing out leaflets to travelers.

The travel hub, which handled almost 75 million passengers in 2018, is the world's eighth busiest airport. In preparation for the protests, the city's airport authority implemented additional security measures, such as only allowing those with boarding passes to enter the check-in area.

The airport demonstration marks the start of the 10th consecutive weekend of protests across Hong Kong, which have been turning increasingly violent. But several activists told news outlets the airport sit-in should remain peaceful. And there were reportedly not many police officers in the arrivals hall hours after the protest started.

Protests began over a now-suspended extradition bill, which would have allowed China to extradite suspects from Hong Kong. But they've grown to include issues like police brutality and calls for Hong Kong's leader Carrie Lam to step down.

Lam, who's refused to step aside, urged people on Friday to stop participating in the protests.