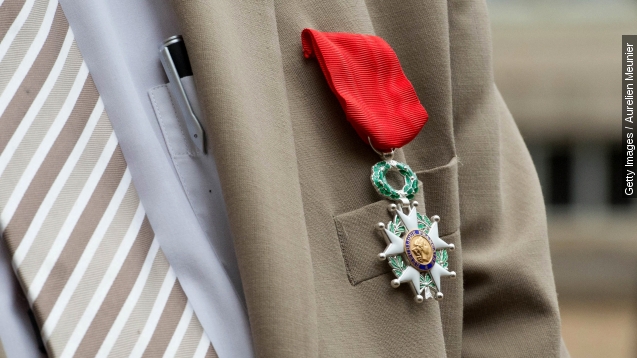 Witnesses say French-American Mark Moogalian, who has lived in France for more than 20 years, was the first to confront the gunman. He reportedly grabbed the attacker's assault rifle but was seriously wounded in the process. (Video via France 24)

Moogalian's sister told NBC: "Mark would give anything for anybody. He's just that kind of person."

After Moogalian’s initial effort, three other Americans and a British passenger overwhelmed the attacker.

The Legion of Honor was created by Napoleon Bonaparte in 1802 to recognize both soldiers and civilians for service to France.

The alleged attacker, 26-year-old Moroccan Ayoub el Khazzani, told his lawyer he was only planning to rob the train. (BFMTV)

"It doesn't take eight magazines to rob a train," Sadler said at a press conference.

"He seemed like he was ready to fight to the end." Stone added.

Anti-terror authorities are investigating the attack, and Khazzani was reportedly on the radar of three different countries. (Video via France 3)

A sixth passenger who first alerted passengers has chosen to remain anonymous. Officials say Moogalian will have his own Legion of Honor ceremony when he recovers.