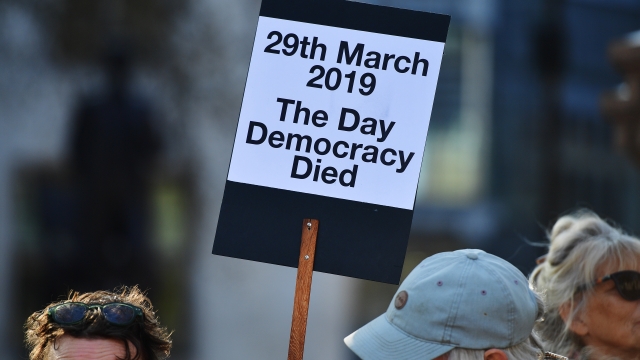 SMS
Thousands Protest UK Parliament After Failed Brexit Vote
By Ahmed Jawadi
By Ahmed Jawadi
March 29, 2019
​After the vote, Brexit supporters swarmed outside the Houses of Parliament in London to express their dissatisfaction.
SHOW TRANSCRIPT

Thousands of Brexit supporters have gathered in protest after U.K.'s Parliament voted down Prime Minister Theresa May's Brexit deal for the third time in a row.

After Friday's vote, several groups of Brexit supporters swarmed outside the Houses of Parliament in London to express their dissatisfaction.

Parliament voted 344 to 286 to reject May's draft proposal to leave the EU. This is also the same day that the country was originally scheduled to leave the bloc.

U.K. lawmakers approved extending the country's withdrawal date from the EU on Wednesday. This pushes Brexit to May 22, but only if Parliament approves Prime Minister Theresa May's deal. If not, the country will have until April 12 to tell the European Council what it's going to do instead.

The EU said in a statement Friday a no-deal Brexit on April 12 is "now a likely scenario." As such, European Council President Donald Tusk has called for an emergency summit on April 10.