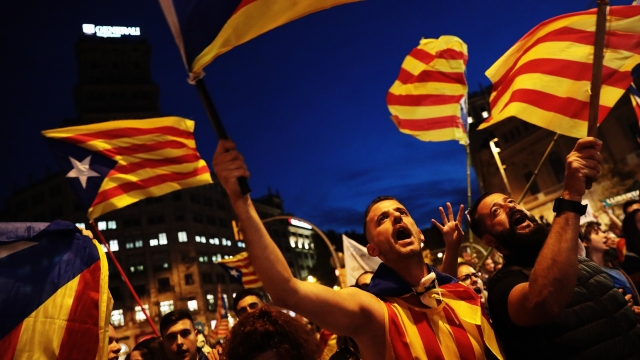 SMS
Thousands Protest In Barcelona Over Catalonia Separation
By Meg Hilling
By Meg Hilling
October 28, 2019
An estimated 80,000 marched for unity in Spain Sunday, in response to the 350,000 separatists who marched Saturday.
SHOW TRANSCRIPT

An estimated 80,000 people marched for Spanish unity in Barcelona on Sunday, just one day after 350,000 Catalan separatists took to the streets demanding secession from Spain.

Protesters in Sunday's march chanted "That's enough" and "The streets belong to everyone," in response to protesters from the separatists' march on Saturday chanting "The streets will always be ours."

Saturday's march started out peaceful but turned violent in evening as demonstrators broke out into different marches and clashed with riot police. The protests were in response to the nine regional Catalonia leaders who were sentenced earlier this month for their roles in orchestrating what Spain’s Supreme Court deemed an illegal referendum in October 2017.

To add fuel to the recent protests, Spain is heading into another election in November, after Prime Minister Pedro Sánchez and his center-left Spanish Workers' Socialist Party won the election in April but were unable to secure a majority in Parliament.

Meanwhile, the president of Catalonia says he wants to make the region independent of Spain by the end of 2021.