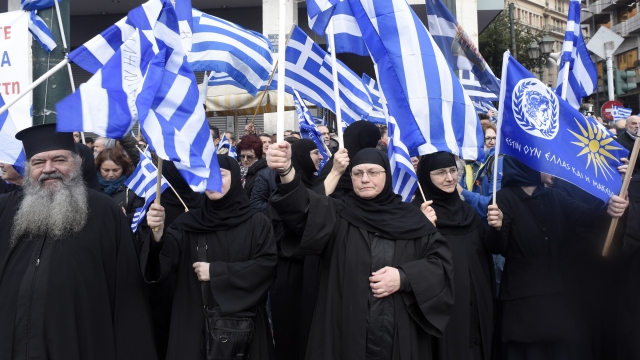 SMS
Thousands Protest In Greece Against Macedonia Name Change
By Briana Koeneman
By Briana Koeneman
January 21, 2019
Tens of thousands of protesters gathered outside Greek parliament in Athens to demonstrate against the deal.
SHOW TRANSCRIPT

Thousands of people took to the streets in Greece to protest against an agreement to change Macedonia's name.

According to several reports, tens of thousands of protesters gathered in Athens' Syntagma square outside parliament to demonstrate against the deal, which lawmakers in Macedonia voted to approve earlier this month.

Under the agreement, Greece's northern neighbor would change its name to the Republic of North Macedonia. And in exchange, Greece would stop blocking Macedonia's attempts to join NATO and the European Union.

But many Greeks aren't on board with the idea. They say Macedonia's name indicates a territorial claim to a northern Greek territory of the same name, and the proposed change just isn't enough.

Greece's parliament will now have to vote on the change. That could take place as early as next week.