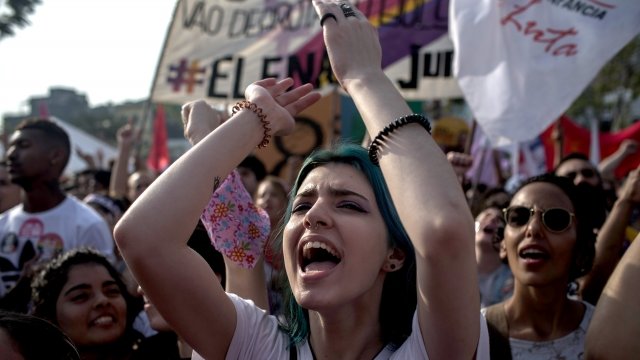 Tens of thousands of people in cities across Brazil took part in protests Saturday against far-right presidential candidate Jair Bolsonaro.

The demonstrations were led by women and coincided with Bolsonaro's release from a hospital, where he'd been recovering from a stabbing attack in early September. The protests, which reportedly started on social media, centered around the slogan and hashtag "Ele Não" — "Not Him."

In the past, Bolsonaro has said he wouldn't pay a woman the same as a man and told a Brazilian congresswoman she was "too ugly to rape." The day before the protests, Bolsonaro said he wouldn't accept the results of the upcoming election if he didn't win.

That, along with Bolsonaro's past praise of the military dictatorship that ruled Brazil for 20 years, have stoked fears of a possible coup.

The first round of voting is scheduled for Oct. 7. Bolsonaro is currently polling ahead of his opponents, but if he doesn't win a majority, there will be a runoff vote. Polls indicate he could lose in the second round.