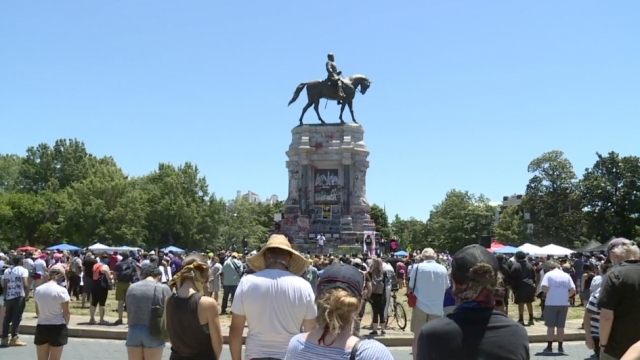 The Richmond Police Department is investigating a police SUV driving into a crowd Saturday evening, after a day of peaceful protests.

Thousands of protesters marched in Richmond, Virgina, Saturday to speak out against racial injustice and police brutality in the wake of George Floyd's death. They also rallied for the removal of a confederate monument.

A peaceful 5,000 Man March started and ended in front of the Gen. Robert E. Lee statue. Tavares Floyd — who is George Floyd's cousin and is from Richmond — spoke to the crowd in the afternoon. Richmond Mayor Levar Stoney also attended.

Stoney told WRIC: "This is no longer the Capital of the Confederacy. This will be the capitol of compassion."

The protest's organizer said police honored his request and stayed outside the traffic circle surrounding the Lee monument. Police also blocked roadways for the marchers' safety.

However, as demonstrations continued near the statue Saturday evening, protesters and police clashed. Video shows a police SUV driving onto a curb and into a crowd. The Richmond Times-Dispatch reports multiple people who blocked the entrance to the traffic circle around the statue were hit, but no one seemed to have been seriously injured.

The Richmond Police Department said it was investigating "a possible assault on an officer inside the vehicle as well as reports on social media that a person in the crowd may have been struck by the vehicle."