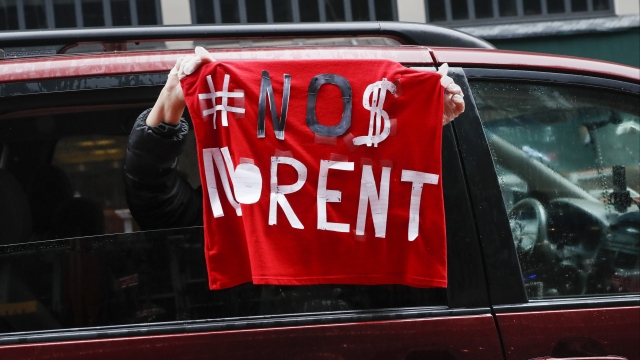 Some states do have moratoriums on eviction, but activists worry about what will happen when those orders are lifted.

Thousands of people across the U.S. pledged not to pay rent on Friday.

As of Thursday, more than 30 million Americans had applied for unemployment since the coronavirus pandemic began. Dozens of states have imposed moratoriums on evictions, but tenants are still worried about what will happen once they're lifted.

In March, New York issued a 90-day ban on all evictions. It provides relief to those struggling to pay rent until at least June 20.

"If a person can't pay their rent because of this situation, they cannot be evicted," Gov. Andrew Cuomo said Friday.

But it doesn't get people out of paying rent altogether. Tenants will have to make up the payments at a later date. Housing activists say postponement is not enough and want rent to be suspended entirely.

The Housing Justice for All campaign, run by the New York-based Upstate Downstate Housing Alliance, is urging state leaders to cancel rent for four months or "the duration of the public health crisis — whichever is longer." The group is also calling for rent freezes to stop rent from increasing during the pandemic.

"I get the people who say nobody should get to pay rent," Cuomo said. "I get that argument. I get that landlords who say, and the building owners who say, 'If nobody pays rent, I'm going to walk away from my building and then it's going to be vacant and I'm not going to pay any bills, because if they don't pay rent, I'm not paying bills', and then you're going to have collapse of buildings."

Doug Bibby, president of the National Multifamily Housing Council, called the strikes "reckless." He said protesters should instead be urging lawmakers to help renters and landlords.

Lawmakers in New York have proposed legislation that would waive or suspend rent for tenants impacted by the pandemic. The legislation also includes funds to support small landlords facing hardship.