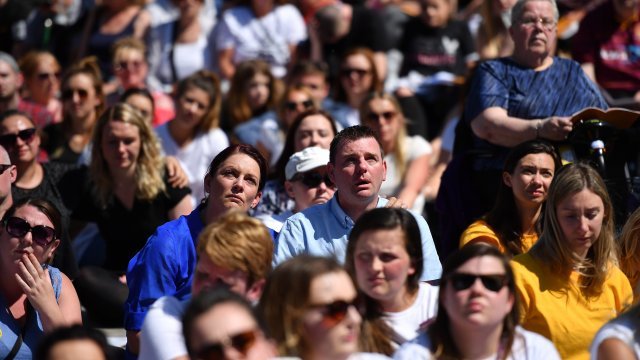 U.K. Prime Minister Theresa May and Prince William joined hundreds of people at a memorial service in Manchester Cathedral.

Thousands of people gathered in England on Tuesday to mark the one-year anniversary of the 2017 Manchester Arena bombing.

U.K. Prime Minister Theresa May and Prince William joined hundreds of people at Manchester Cathedral to honor victims of the attack at a memorial service. There was also a national moment of silence at 2:30 p.m. local time.

On May 22, 2017, 22 people, including children, died after a bomb exploded at the end of an Ariana Grande concert inside Manchester Arena. Two weeks later, Grande organized a benefit concert that raised millions of dollars for those affected by the bombing.

Almost a year after the Grenfell Tower fire, the U.K. government will look into banning a highly flammable cladding on high-rise buildings.

On Tuesday, Grande tweeted: "Thinking of you all today and every day. I love you with all of me and am sending you all of the light and warmth I have to offer on this challenging day."

Bells will ring at 10:31 p.m. at the city center in Manchester — the exact time of last year's bombing.