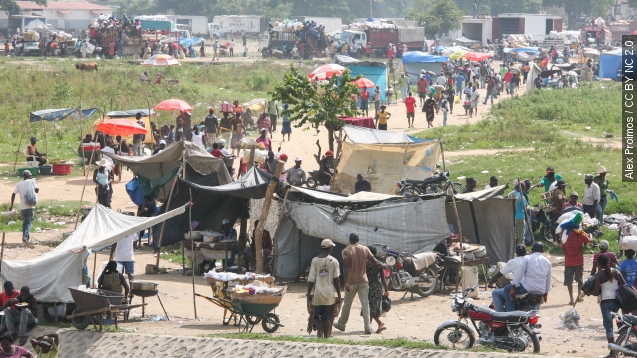 Hundreds of thousands of immigrants face possible deportation from the Dominican Republic Thursday after a deadline to register for legal status passed. The majority of those immigrants are from Haiti.

Local outlets report when the deadline passed, thousands of people were still waiting in line to register. A Dominican official said 275,000 people had registered, but that is little more than half of the estimated number of foreign-born migrant workers living in the country. (Video via CDN)

The move stems from a 2013 Constitutional Court ruling which said children of immigrants would no longer be considered Dominican citizens unless they had at least one Dominican parent, even if they were born in the country, and applied the ruling retroactively as far back as 1929. (Video via Telenoticias)

That meant Haitian families who had been in the Dominican Republic for generations were at risk of deportation. The country's president pushed through a law granting a path to citizenship, but activists say the process has been dogged by delays. (Video via Presidencia de la Republica Dominicana)

Mass deportation from the Dominican Republic isn't new. The country sent immigrants who had fled Haiti's 2010 earthquake back across the border by the thousands in 2011. (Video via PBS Newshour)

But this time around, the criteria for having to register were so broad they affected nearly half of all Haitians living in the Dominican Republic, according to human rights groups.

The Dominican government has defended the deportation, calling it necessary and saying it would be orderly and humane. (Video via Presidency of the Dominican Republic)

And after the 2013 court ruling, the country's then-ambassador to the US wrote several opinion pieces attacking claims the Haitians would become stateless, saying they would be considered citizens under Haiti's constitution.

But activists claim the move won't be nearly as orderly and fair as the Dominican Government says, and that people in the Dominican Republic could be swept up into the immigration system for simply being perceived as Haitian.

"This law will affect Dominicans of Haitian descent who can just be picked up because they have a Haitian-sounding name or because they look 'Haitian' or black," Haitian writer Edwidge Danticat told Democracy Now.

TeleSur reports at least 2,000 troops have been deployed for deportations in the Dominican Republic, but a reporter told the outlet the deportations will be gradual for now.