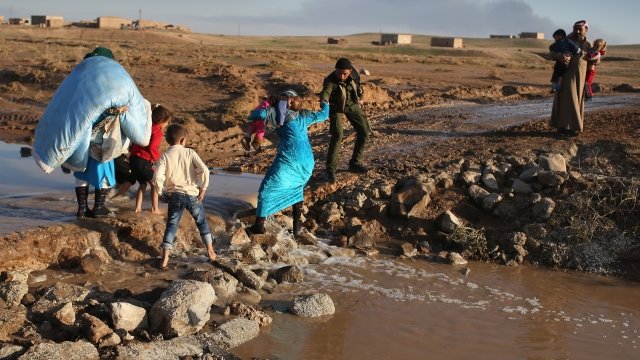 SMS
Thousands Displaced After Turkey Invades Kurdish Stronghold In Syria
By Jake Jones
By Jake Jones
January 23, 2018
Turkey considers the Syrian Kurds terrorists even though they're backed by its ally, the U.S.
SHOW TRANSCRIPT

An estimated 5,000 people have been displaced as Turkish forces advance into a Kurdish stronghold in Syria, according to a United Nations report.

Turkey considers the Syrian Kurds terrorists, even though they're backed by the U.S., an ally. It launched "Operation Olive Branch" over the weekend in order to create a 19-mile safe zone between the Turkish border and Kurdish forces.

It's not clear how many people have died in the skirmish. One human rights monitoring group puts the death toll at 26 Kurdish fighters, 25 Syrian fighters allied with Turkey and 24 civilians. A Turkish state-run news agency reported two Turkish soldiers had been killed.