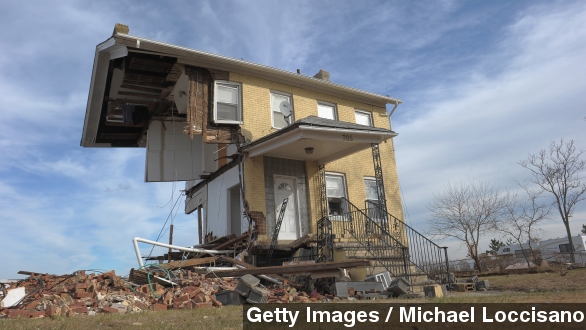 After handing out $1.4 billion in the wake of Superstorm Sandy, the federal government is asking for some of it back.

"FEMA is scrutinizing 4,500 households. ... FEMA's already told about 850 families have been told they have to return almost $6 million." (Video via WABC)

As some local media pointed out, this isn't necessarily a matter of fraud, but in some cases missing documents or even agency mistakes in handing out the aid.

"Some recipients were ineligible for aid because their damaged properties weren't their primary residence. Others had double-dipped into the aid pool, and some had received FEMA money for things later covered by insurance." (Video via WXXA)

By the numbers, Fox News reported of the 850 cases, 25 were households with an income exceeding $500,000 while about half of the cases involved victims making less than $30,000 annually. The average repayment request was $7,000.

But is it fair to ask for refunds from those whose aid was spent two years ago? The Weather Channel was sympathetic toward those affected by the storms.

"It's a terrible feeling. I'm still recovering from the storm emotionally and financially. And to come back and say, we want all the money we gave you back ... "

"But this isn't a new thing — FEMA tries to recover overpayments after every disaster. After Hurricane Katrina, thousands of households were asked to return aid money." (Video via WRGB)

Before Superstorm Sandy, FEMA requested 83,000 victims of Hurricane Katrina repay portions of their aid totaling $385 million, according to The Washington Post.

This led to a court-appointed overhaul of the agency's system in 2012 and led Congress to legislation that allowed waiving some or all of the victims' debts.