This Turtle Is Fluorescent, And Scientists Aren't Sure Why 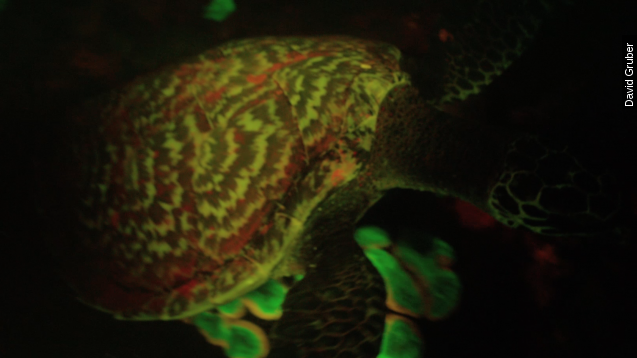 SMS
This Turtle Is Fluorescent, And Scientists Aren't Sure Why

By Sebastian Martinez
September 30, 2015
The recent discovery of a fluorescent hawksbill sea turtle could shed more light on the role of biofluorescence in nature.
SHOW TRANSCRIPT

This is not a typical hawksbill sea turtle.

This is a typical hawksbill sea turtle. Spot the difference? (Video via YouTube / Blogie Robillo)

This hawksbill is fluorescent, which is something hawksbills aren't really known to be.

No, it's biofluorescent, according to marine biologist David Gruber, who shot this video.

The way it works is, rather than producing its own light, the turtle's shell reflects blue light as red and green — something you can see is clearly not happening with this hawksbill. (Video via YouTube / otsbey, YouTube / Isla Nena Scuba)

Researchers have recently discovered biofluorescence in some fish and crustaceans but never a reptile like the hawksbill. (Video via American Museum of Natural History)

While biofluorsecence is used in some animals to attract prey, hawksbills largely feed on sponges and algae, so a more likely hypothesis — as another marine biologist told National Geographic — is camouflage. (Video via YouTube / HorsePunchKid's channel)

Still, it'll take more research to understand — something that might not be possible with the hawksbill, which is critically endangered.