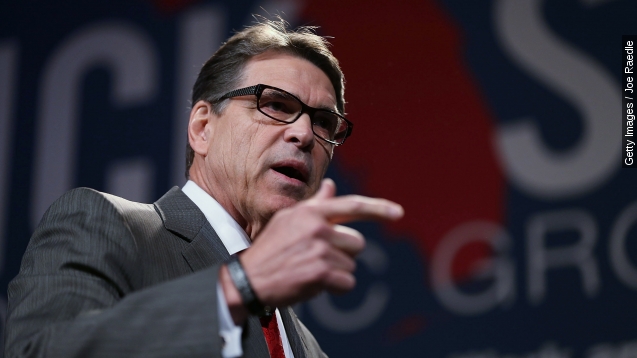 "Today I am running for the presidency of the united states of america," Perry announced. (Video via KXAS)

He first ran for president back in 2011 when this happened. (Video via CNBC)

Perry forgot one of his talking points during a televised debate and simply said, "Oops."

He told CNBC that was the product of being unprepared, and things are different now.

"I've spent the last 22, 23 months in preparation to run for the president," Perry said.

While Perry's joining a similarly crowded field this year, there are some other important differences from four years ago. (Video via MSNBC)

First off, there's no established frontrunner yet.

While he didn't exactly set the party on fire, Mitt Romney had consistently dominated polling in the Summer of 2011, until Perry's announcement threw him into the lead. (Video via InsiderIowa.com)

Now, the latest polls show Jeb Bush and Scott Walker tied for the lead at 12 percent — half of what Romney was polling in June of 2011. (Video via C-SPAN)

Perry's also still facing an indictment filed against him by a district attorney who alleges he tried to coerce her into stepping down. He's called it a politically motivated "farce." (Video via CBS)

Still, some things remain the same. Going off his website and video, it seems Perry's again going to push his experience as Texas governor in his campaign. (Video via rickperry.org)

And there's every indication he still really loves talking with his hands during speeches. (Video via The American Conservative Union)