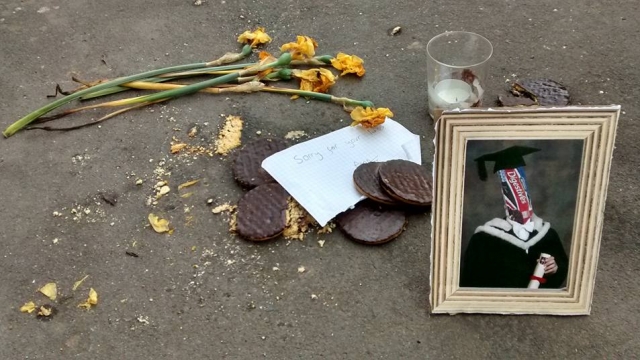 SMS
This Shrine For Cookies Tragically Dropped On A Street Is Pretty Sweet
By Briana Koeneman
By Briana Koeneman
April 18, 2016
Someone dropped a bag of cookies on the ground in Leamington Spa, England. And the town's residents were pretty sad about it.
SHOW TRANSCRIPT

There's arguably nothing more depressing than dropping a freshly opened bag of cookies on the ground. And a town in England couldn't agree more.

It all started when Hugh Osborn was walking down the street in Leamington Spa and spotted an open package of Digestive chocolate cookies tragically tossed on the sidewalk in a sad, broken heap.

Osborn told The Independent he "felt the twinge of sympathy natural for such a horrible scene," so he took a photo and posted it to Twitter so the world could mourn with him. And boy, did it ever.

Osborn says his roommate found a surprising scene when he walked by the crumbled cookies the next day — a fellow cookie lover had placed flowers and a candle next to the fallen sweets.

And the day after, a sympathy note appeared in the pile of crumbs.

After that, Osborn just had to make his own contribution — a framed photo of the dearly departed cookies in a graduation outfit.

Of course, word of the epic shrine began to spread, and the original creators came forward to claim their masterpiece.

And the cookie-dropper herself even publicly admitted her heinous crime. We'll forgive you someday, Rachel.

Osborn says the cookie shrine has since vanished, and we found out where it disappeared to: this gal's porch. We don't know why. And she doesn't, either.

But Osborn won't soon forget the horrible tragedy. As he told The Independent, "Biscuit welfare is an issue close to my heart." By the way, Americans call British biscuits "cookies."

Kind of reminds us of another memorial we saw last year — except not as morbid.