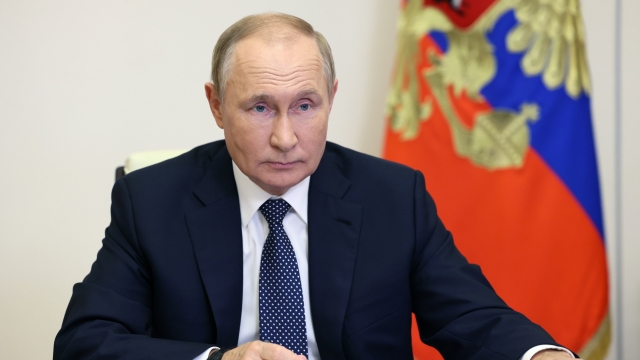 Most of the world has never heard of the 12th Main Directorate, but they are the secretive forces that Vladimir Putin invokes every time he threatens to deploy nuclear weapons.

They protect and maintain Russia's nuclear arsenal, keeping custody of a weapon until the moment it takes off. Newsy sat down with top nuclear weapons experts who knew them.

"Just meeting them the first time, that was, you know, like meeting a ghost. Someone who wasn't even allowed to have their picture taken in the former Soviet Union. Even within Russia, it was not permitted to utter the words '12th Main Directorate,'" said Moon.

Moon led nuclear security efforts through the U.S. government's Cooperative Threat Reduction Program. From 2003 to 2012 and with Russian security services watching, staff visited and secured Russia's most sensitive sites classified bases that held thousands of nuclear warheads inherited after the Soviet Union's collapse, which were vulnerable to thieves and terrorists.

"Just getting there was several days' work. You're put in a van with your team for up to three hours. The van has the windows blocked out. You can't see out of it. You're going over very bumpy roads," said Moon.

Putin permitted the visits but ended it all 10 years ago, wanting a more reciprocal arrangement. Those inside the directorate haven't been allowed to speak with Americans ever since, even though men Moon knew still work in the unit.

Pavel Podvig, a senior researcher on weapons of mass destruction at the U.N. Institute for Disarmament Research, said the directorate is compartmentalized.

Ukrainian forces penetrated Moscow's defenses in the southern Kherson region, one of the four areas in Ukraine that Russia is annexing.

"They had this nickname back in the Soviet days of 'deaf and dumb,' because they were not supposed to tell anyone anything and to hear anything. I personally knew some of the previous directors. These are very responsible, very professional people. They are not really ideological. And actually, being in the military, most of them came from the Soviet military. They certainly have a certain world view. But I think the culture in the 12th Directorate is really about professionalism," said Podvig.

Although it's still secretive, today the directorate has a Telegram channel. It makes no mention of the war in Ukraine or Putin's nuclear threats. Podvig says agents lived and worked at the same site for their entire career, moving only in a job title. He identified 12 national-level storage sites and 35 base-level sites, some of which recently attracted U.S. surveillance, according to flight-tracking websites.

NEWSY'S SASHA INGBER: There are certain spy planes that have been flying over locations, Kaliningrad, for example. What's there?

BILL MOON: We never went because we declined to offer assistance to secure that site. So that's still certainly a site of high interest in the West.

This week, video shared on social media appeared to show the unit transporting equipment by rail, which Moon confirms. Some thought it was Putin sending a signal or preparations for drills. Moon says it may show Russia taking trucks and weapons away from the forces who guard nuclear warhead shipments to instead arm troops fighting the war in Ukraine. Experts say a nuclear attack there would not help Russia's already degraded troops.

"The environment on the battlefield would be dramatically different because of the radioactive fallout and all that. And then the general purpose forces of the tanks, their artillery, they would have a much more difficult environment in which to operate," said Podvig.

Putin can't just press a button. Officials say he has a chain of command, which would eventually reach the head of the 12th Main Directorate, Lt. Gen. Igor Kolesnikov.

INGBER: Would General Kolesnikov in any way ever question an order?

MOON: I don't know him personally. I can't say so. The thing to remember about the 12th Main Directorate is that they will very much separate their mission and their duty from any sort of outlook or political sensibilities. It's all about the mission.