This Robot Mermaid Is The New Way To Explore Oceans 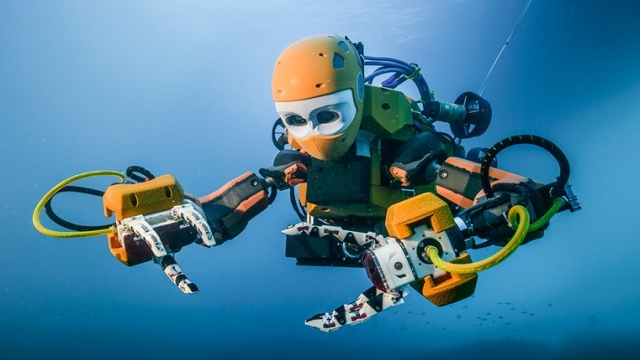 Instead of a tail, the humanoid OceanOne robot uses a series of thrusters to move around the ocean.

The OceanOne, developed by a team at Stanford University, had its first real-world test recently when it surveyed the wreckage of La Lune, a 17th century ship that sunk near the southern coast of France.

It basically looks like a robot mermaid, but instead of a tail, it uses a series of thrusters to move around the ocean.

The bot's hands are fitted with sensors that can send feedback to the operator. It gives the human controller a better sense for when the robot is touching something firm or delicate.

The team that developed the robot says that technology allowed the OceanOne to bring back a centuries-old vase from La Lune without accidentally crushing it.

It's meant to keep human divers out of potentially dangerous situations in something like deep-water mining or oil-rig maintenance.

There's another robot that fills a similar role, but instead of taking a humanoid shape, it looks a lot like a snake.

At least the OceanOne is a little less creepy-looking.