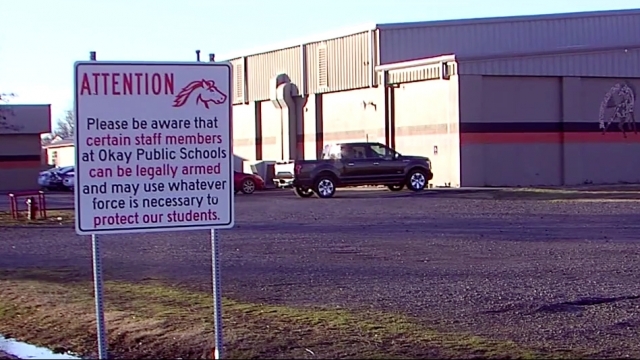 It doesn't get much more direct than "whatever force is necessary" posted on a sign outside an elementary school. The school district in Okay, Oklahoma, is allowing employees to carry guns on campus.

Last May, Oklahoma lawmakers passed a bill that allows faculty and staff to bring guns on campus after they pass security training and are OK'd by the school board.

"I think it's great. I mean it really gives me a peace of mind. With issues at school. You know I'm not really worried much, and I really have faith in our school system," says parent Jody Fulton.

According to the superintendent, one of the reasons for the policy is the lack of campus police officers. He says the district, which has about 400 students, doesn't have that "luxury" because of its size.

If the sign for Okay Public Schools looks familiar, that's because a similar sign with the same warning sits outside of a school in Argyle, Texas, which has had the policy for about two years.

The Okay School District superintendent also says several other superintendents asked him for advice and said they had plans to enact the same policy at their schools.