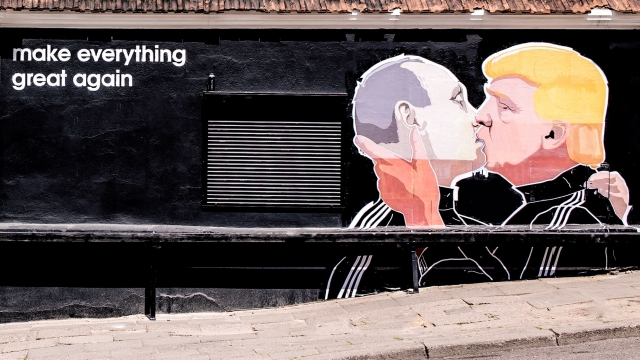 SMS
This Mural Just Brought The Trump-Putin Bromance To A New Level
By Melissa Prax
By Melissa Prax
May 15, 2016
A mural on a Lithuanian restaurant shows Vladimir Putin and Donald Trump locking lips in the style of Leonid Brezhnev and Erich Honecker's famed kiss.
SHOW TRANSCRIPT

This Lithuanian barbecue joint is getting political — but not about what's going on in its own country.

A mural on the outside of Keulė Rūkė reads "Make everything great again" and depicts Vladimir Putin and Donald Trump sharing a kiss.

The relationship between the Russian leader and the presumptive GOP nominee has been the subject of jokes ever since the two traded compliments last year.

"I think I would get along very well with Vladimir Putin. I just think so," Trump said.

Putin's response: "He wants to move to a different level of relations, to more solid, deeper relations with Russia. And how can Russia not welcome that? We welcome that."

And if the Lithuanian mural looks familiar, that's because it was based off an iconic image from 1979. That's when Soviet General Secretary Leonid Brezhnev and leader of East Germany Erich Honecker shared a "socialist fraternal kiss" to demonstrate their unity.

That kiss was caught on camera and later painted on a remnant of the Berlin wall.