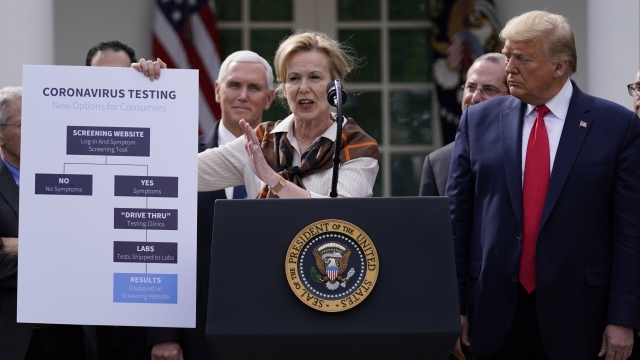 "To unleash the full power of the federal government that this effort, today I am officially declaring a national emergency."

President Donald Trump's coronavirus national emergency gives him access to as much as $50 billion in federal funding to combat the virus.

According to the CDC, the virus had infected more than 1,600 people in the U.S. as of Friday. At least 46 states and Washington, D.C., have reported cases.

The Trump administration also said it's borrowing an idea that's already being used abroad: drive-through testing clinics. Retailers like Walmart and Walgreens have volunteered portions of their parking lots to house the clinics. Health officials note that people can still have the coronavirus even if they don't have symptoms, but that tests won't be performed unless people are symptomatic. The administration is asking people to fill out an online screening questionnaire before getting tested.The president denied that he was responsible for early testing failures, which health experts say helped the virus spread faster.

"We don't want people to take a test if we feel that they shouldn't be doing it," President Donald Trump said. "And we don't want everybody running out and taking — only if you have certain symptoms."

The coronavirus has disrupted day-to-day life for virtually everyone: Schools in multiple states are either closed or moved online; many mass gatherings, including concerts and major sporting events, have been postponed, banned or canceled; and travel plans have been put on hold. Even the so-called happiest place on Earth has closed its doors.

Meanwhile, to ease some financial concerns, President Trump said he is waiving interest on federal student loans and buying more oil for the country's reserves while prices are low.

The president has implemented travel restrictions from specific countries. Starting Friday at midnight, most foreign nationals who have visited Europe's Schengen Area in the past 14 days will not be allowed into the U.S.