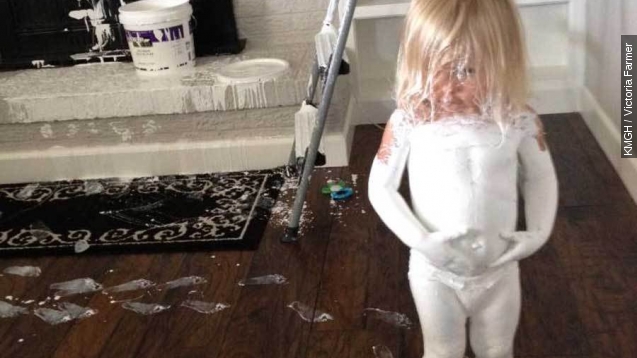 A tale as old as time: a family trying to sell their house, keeping it spick and span, repainting to boost its appeal.

Anistyn's mother told Newsy's partners at KMGH her 2-year-old daughter submerged herself in a bucket of white paint they were using to paint their home.

"Her mom said that, you know, usually you wait until 2 to reach your terrible 2s; she said hers started six months ago," ABC anchor Amy Robach said.

"That's one of those you get so annoyed that you're laughing," ABC anchor George Stephanopoulos said.

Toddlers. Can't turn your back for a second. If you do, they might cover themselves in paint.

Or spaghetti. Or mud. Or ... just about anything.

Anistyn's mom, Victoria Farmer, said she knew something might be awry when things seemed a little too quiet while she breastfed her son.

Never trust a quiet toddler. After she found the mess, Farmer asked her sister to help her put a washrag under Anistyn and carry her to the bathtub.

The paint washed off Anistyn — but the family is still trying to remove it from the floor.

This video includes images from KMGH / Victoria Farmer and Facebook and music from Kevin MacLeod / CC BY 3.0.