This Is 'Definitely' Coach K's Last Run With Team USA 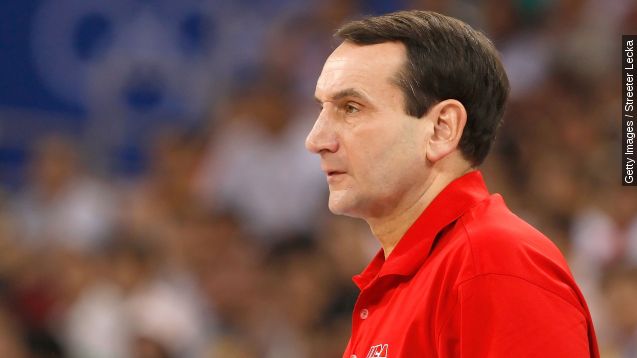 He's been a constant on the USA men's basketball sideline for decades, but after 2016, Mike Krzyzewski will no longer be head coach for the Olympic team.

When asked if this was his final year, Krzyzewski told ESPN: "It is. It definitely is."

The news isn't terribly shocking from the 68-year-old coach. He announced prior to the 2012 games he was done, but got roped back in for the 2016 Olympic games in Rio de Janeiro. (Video via UNC-TV)

Krzyzewski's been involved with USA men's basketball since 1979 but wasn't named head coach until 2005.

And since then, the USA's been dominant, to say the least. They're 75-1 under Coach K's tenure.

What does leaving the USA Olympic team mean for his time at Duke? Probably nothing. (Video via The News & Observer)

As recently as April, Krzyzewski's said he's not close to retiring.

"I'll be back next year and, I would think, for a few more years," Krzyzewski said on "The Dan Patrick Show."

And we're sure Krzyzewski will be invited back. Not only are the Blue Devils coming off a national title victory, but he's also the winningest active coach in NCAA men's basketball. Not bad.