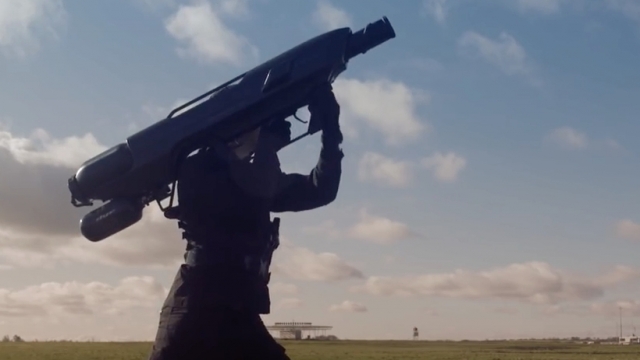 This bazooka-like device fires nets at drones to pull them out of the sky.

No doubt about it: Drones are getting popular. And governments and private companies alike are scrambling to find a solution to take out devices that buzz around in areas where they shouldn't be.

OpenWorks Engineering thinks it's found that solution: an anti-drone net launcher that looks like it came straight out of a video game.

The SkyWall 100 uses a smart scope that predicts the drone's flight path to help the user aim. It then uses compressed air to launch a tiny rocket that drops a net on the drone. The net has a parachute attached to give the drone a softer landing so it isn't too damaged if it's part of a forensic investigation.

Capturing unwanted drones is hardly a novel idea. There's a drone that can actually shoot nets at other drones and return them safely to the ground.

There's also the old-school solution of training eagles to pluck drones out of the sky — y'know, like the Dutch police did.

The Skywall is only available on a made-to-order basis right now, but the makers told Wired that the U.K.'s Metropolitan Police are interested in the device.

This video includes a clip from DJI and Politie.