This Disney Filing Shows Why ESPN Is In Trouble 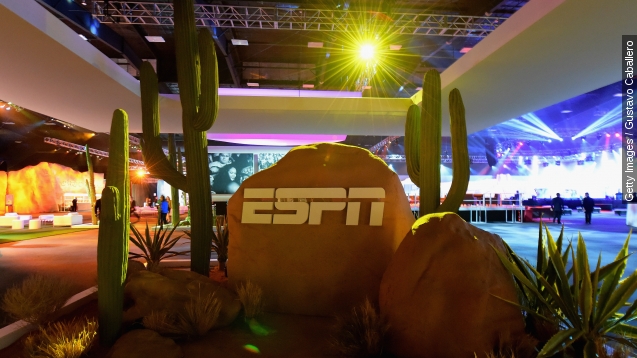 SMS
This Disney Filing Shows Why ESPN Is In Trouble
By Cliff Judy
By Cliff Judy
November 26, 2015
Disney's annual 10-K filing to the SEC showed one of the conglomerate's biggest moneymakers, ESPN, lost another 3 million subscribers.
SHOW TRANSCRIPT

"Hey, welcome to SportsCenter!" ESPN's commercial says as "End Your Day on a Highlight" flashes on the screen.

ESPN — the network that encourages viewers to "end your day on a highlight" — probably isn't thrilled about some of the highlights in financial records released just before the Thanksgiving holiday weekend.

Subscriber numbers of 92 million might seem strong until you consider this time last year, that number was 95 million. The year before that? It was 99 million.

A 7 percent drop in just two years' time is absolutely something worth paying attention to, if not panicking over. And we're talking both for Disney and the larger cable/satellite industry.

Disney's Media Networks division made up 53 percent of the conglomerate's operating income this past year. And guess which particular network made the bulk of that money. (Video via ESPN)

So while ESPN is making more money than ever by forcing cable companies to pay more to carry the network, losing 7 million cord-cutters means Disney left a lot of money on the table.

Live sports, which ESPN and its sister stations obviously specialize in, has long been seen as a cornerstone to keep as many cable subscribers as possible in place.

So when Disney CEO Bob Iger said in August that ESPN had "some subscriber losses," the ripple effect across the industry was pretty big. (Video via Vanity Fair)

As Fortune's Mathew Ingram put it: "There's no sign that the trend of cord cutting and OTT is going to end anytime soon. If anything, it is accelerating. If you notice investors reacting nervously to Disney results, that's why."

No one's about to pretend cable's going away. The infrastructure and offerings are too massive. (Video via ESPN)

But the all-channels-in-one-bundle cable packages look less and less attractive to millennials, and we may be getting closer to a time when massive media companies have to make hard decisions.