Some Claim This Calif. Bill Would Ban Selling The Bible. It Wouldn't. 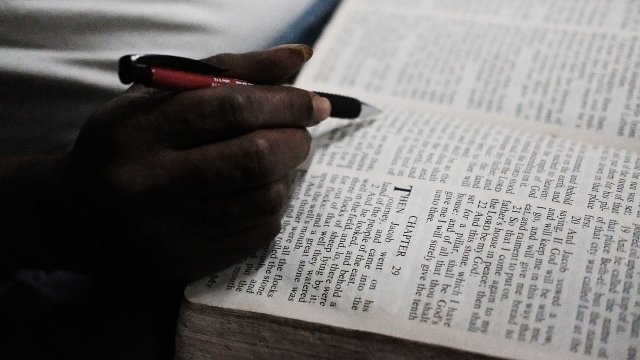 SMS
Some Claim This Calif. Bill Would Ban Selling The Bible. It Wouldn't.
By James Packard
By James Packard
May 2, 2018
California is considering a law to protect people from any attempt to change their sexual orientation. Some groups think it will ban Bible sales.
SHOW TRANSCRIPT

California lawmakers wrote up a bill aimed, in part, at curbing efforts to change a person's sexual orientation. Some activist groups and pundits took that to mean something else, too.

"If this bill were to pass, would this prohibit the sale of the Bible, that teaches these things about sexual morality?" a TV host asked California Rep. Travis Allen, a Republican.

"Well, literally, according to how this law is written, yes it would," Allen replied.

Whoa, not so fast. The bill keeps people from selling or advertising sexual orientation change efforts.

That means "efforts to change behaviors or gender expressions, or to eliminate or reduce sexual or romantic attractions or feelings toward individuals of the same sex."

For that to apply to the Bible, experts say someone would have sell a Bible as part of selling something else that's meant to try to change someone's sexual orientation — but even then, it's not certain the rule would apply, since the Bible might not be considered "commercial speech." So the claim that the bill would outright prohibit selling the Christian holy text is a major, major stretch.