This Bill Could Shut Down SeaWorld’s Orca Breeding For Good 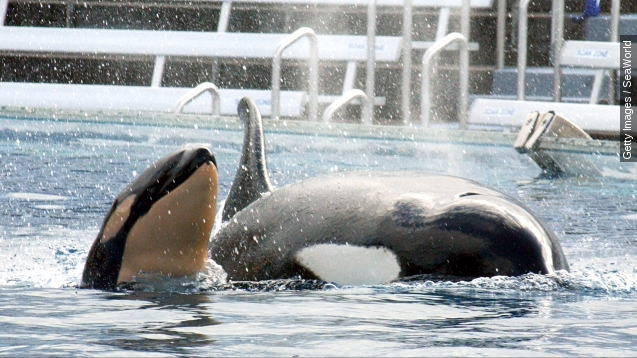 SMS
This Bill Could Shut Down SeaWorld’s Orca Breeding For Good
By Jillian Deutsch
By Jillian Deutsch
November 8, 2015
The theme park has had a rocky year. It replaced its CEO and saw a decline in attendance and stock value.
SHOW TRANSCRIPT

SeaWorld is taking another hit after a House Democrat proposed a new bill to shut down orca breeding.

California lawmaker Adam Schiff announced a new bill that would ban the importing or breeding of orcas for public display.   (Video via KCBS)

The Orca Responsibility and Care Advancement Act has received support from animal rights groups and representatives of both parties.

Though it's still early for the ORCA Act, SeaWorld has been in hot water for a while.

The 2013 documentary "Blackfish" jump started all of this. The film focuses specifically on how captivity can cause aggression in orcas. It tells the story of a SeaWorld trainer who was killed while interacting with a whale.

After the film, attendance has steadily dropped. SeaWorld's stock fell 50 percent in 2014 and posted another disappointing quarterly earnings earlier this month. (Video via SeaWorld)

The decline led to SeaWorld CEO Jim Atchison stepping down in January of this year. Two months later he was replaced by Joel Manby, the former president of the company that owns Dollywood.

And last month, the California Coastal Commission banned breeding the killer whales in the state, which SeaWorld says it plans to fight. (Video via Zoo Nation)