This Artist Covers Up Hateful Tattoos For Free 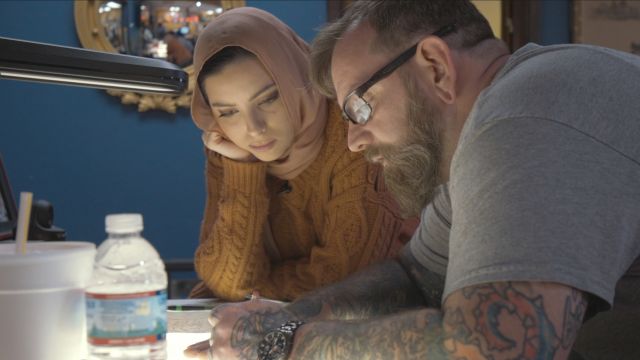 In Baltimore, a tattoo parlor offers free cover-ups for racist and hateful tattoos. Dave Cutlip, owner of Southside Tattoo, designs the cover-ups himself, and many former gang members and white supremacists have asked for his help.

One man with a tattoo on his upper arm said he wanted to permanently cover it so he could start fresh.

Cutlip says he thinks there's a recurring reason his clients want a cover-up like that.

"The most common, really, is that 'I was young and dumb. I was stupid,'" Cutlip said. "That's the word they're using. They felt that what they had done wasn't right, and they want to move on. I hope that they genuinely have a change of heart. Just because they made mistakes in their past life doesn't mean they should suffer for the rest of their life."

Cutlip says people are more than their body art.

"You know, a tattoo don't make a person," Cutlip said. "A person makes the person."

And some who seek Cutlip's help have tattoos that sometimes carry painful memories. The customer that day spoke candidly about his tattoo.

"It was a Simon City Royal [a Mississippi gang] enforcer patch," the man said.

He says there was one time when that tattoo meant a lot to him.

"I can say at one point in time," he said. "Then when you see friends dying around you or ODing, it takes on a whole new meaning then. And then you end up in prison for it. I've been shot. I've been beat."

He says not having the tattoo has changed some things in his life.

"Everything, really," he said. "I won't have to worry about me being out with my kids and anything happening."

As for Cutlip, he says he doesn't foresee ending his free service anytime soon.

"I'm going to keep going until I can't tattoo no more," Cutlip said.