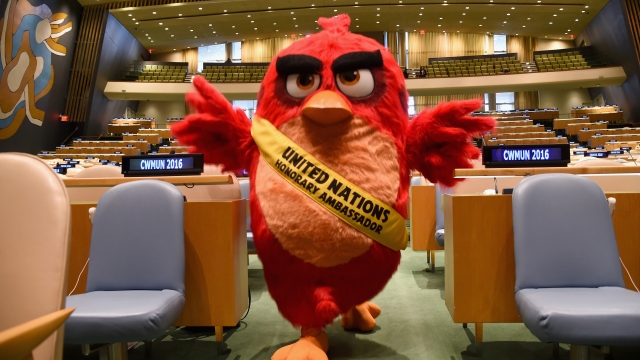 SMS
This 'Angry Birds' Character Is The Newest UN Climate Change Champion
By Bell Johnson
By Bell Johnson
March 19, 2016
The U.N. partnered with Sony Entertainment to raise awareness about climate change with a little help from its newest honorary ambassador.
SHOW TRANSCRIPT

The United Nations has found its newest honorary ambassador in the form of a very angry, red bird who isn't too pleased about climate change.

"I have been talking with my friend Red, and he's angry," said U.N. Secretary General Ban Ki-moon.

Red, the lead character of the popular mobile game and the upcoming "Angry Birds" movie, will embark on a virtual worldwide tour starting in Paris and ending in New York City, highlighting the relationship between happiness and a healthy planet.

As part of the U.N.'s sustainable development goals, the campaign asks people to take pictures of themselves conserving water or taking public transportation and then to post those pictures on social media while using the hashtag #AngryBirdsHappyPlanet.

U.N. Secretary General Ban Ki-moon said he hopes the popularity of "Angry Birds" bring attention to the issue, saying "We are proud to give Red a reason to go green."

The campaign comes at a time when there's an increasing concern about the human impact on the environment. Since 1990, carbon dioxide emissions have increased by about 50 percent, and in the past century the sea level has risen by 4 to 8 inches.

This video includes clips from the United Nations and Sony Pictures Entertainment and images from Getty Images.