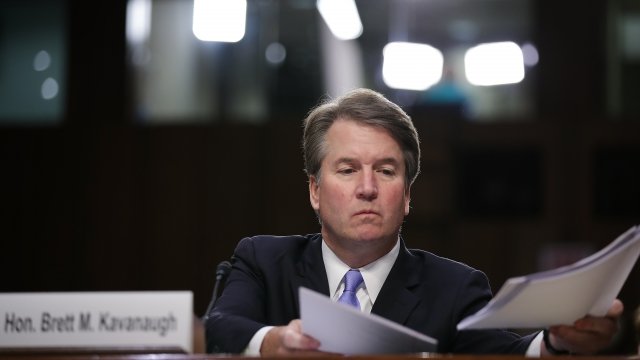 Attorney Michael Avenatti revealed the identity of his client, Julie Swetnick, on Wednesday, and demanded an immediate FBI investigation into the allegations.

Swetnick claims she witnessed Kavanaugh partake in inappropriate behavior while they were in high school in the early 1980s.

In a sworn affidavit to the Senate Judiciary Committee, Swetnick claims to have seen instances at multiple parties where Kavanaugh engaged in "abusive" behavior toward women. She says Kavanaugh and others attempted to spike girls' drinks in order to make it easier for them to be sexually assaulted.

To be clear, Swetnick is not accusing Kavanaugh of assaulting her personally.

Two other women, Christine Blasey Ford and Deborah Ramirez, have also accused the judge of sexual misconduct in separate instances.

The new claims come ahead of Thursday's Senate Judiciary hearing, where an outside female sex crimes prosecutor will question both Kavanaugh and Ford about the accusations.

In written testimony and a Fox News interview, Kavanaugh denied the allegations and said he's never sexually assaulted anyone. He responded to Swetnick's claims Wednesday, saying they were "from the Twilight Zone" and that he doesn't know who she is.

The panel is expected to vote on the nomination Friday morning.