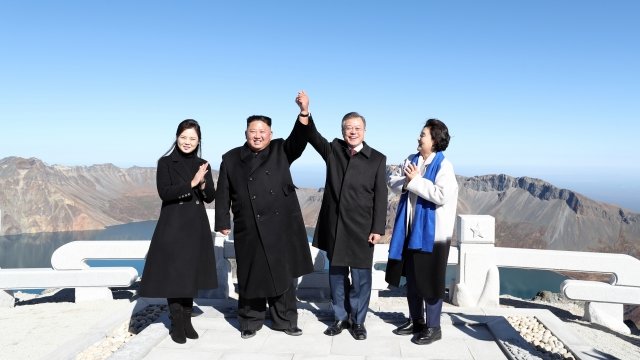 By Katherine Biek
September 20, 2018
The leaders of North Korea and South Korea visited the highest peak on the Korean Peninsula Thursday.
SHOW TRANSCRIPT

The first two days were reserved for talks on stalled nuclear negotiations and other inter-Korean issues.

But the two leaders ended their third summit with a highly symbolic gesture — a visit to Mount Paektu. It's the highest peak on the Korean Peninsula and is considered the spiritual birthplace of the Korean people.

One outcome of this latest summit is already clear — the Trump administration said it wants to restart denuclearization talks with North Korea.

Secretary of State Mike Pompeo invited his North Korean counterpart to sit down with him when the two are in New York next week for the U.N. General Assembly meeting.

Pompeo said Wednesday that wants Kim to get rid of his nuclear arsenal by January 2021, which would be around the time President Trump finishes his current term in office.