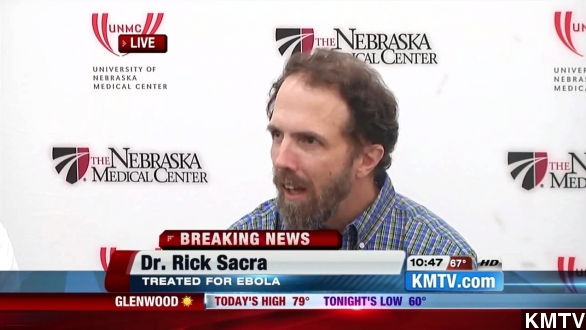 By Matt Picht
September 25, 2014
Dr. Rick Sacra has been released from isolation in Nebraska Medical Center after the CDC pronounced him cured of Ebola.
SHOW TRANSCRIPT

Dr. Rick Sacra, the third American infected with ebola during the recent epidemic in West Africa, has just been released from the hospital after being cleared of the virus.

DR. RICK SACRA VIA KMTV: "I never felt like I was not going to make it. The care was so excellent, so speedy, so prompt, that I'm just thanking God for that."

Sacra was released from Nebraska Medical Center Thursday, where he's been isolated since Sept. 5. Officials from the Centers for Disease Control and Prevention have confirmed Sacra's blood is free of the virus. (Video via WOWT)

Sacra was infected with Ebola while working in Libera to deliver babies. He's the third American to contract the disease; the first two patients, Dr. Kent Brantly and Nancy Writebol, both made full recoveries from the disease.

His treatment included a blood transfusion from Dr. Brantly, containing antibodies which might have helped battle the illness. (Video via NBC)

And Sacra was also receiving an experimental drug treatment, TKM-Ebola, which is designed to stop the virus from spreading.

In a speech at the United Nations Thursday, Obama exhorted other nations to do more in the fight against Ebola.

PRESIDENT OBAMA VIA THE WHITE HOUSE: "Right now, everyone has the best of intentions. But people are not putting in the kinds of resources that are needed to stop this epidemic."

But the world still has a long way to go before the Ebola outbreak is contained. The World Health Organization reports over 6,000 cases and almost 3,000 deaths from the virus so far, and CDC estimates say the number of infected people could grow to 1.4 million cases by the end of January.

So far, four Americans have contracted Ebola during this outbreak. The fourth patient, whose name has not been disclosed, is currently being treated at Emory Hospital in Atlanta.