Things To Know As The Pistorius Trial Draws To A Close 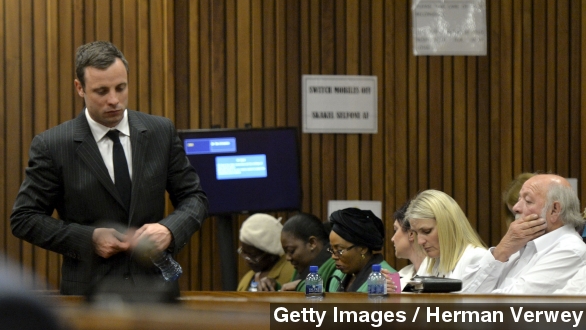 By Sebastian Martinez
September 10, 2014
Oscar Pistorius will soon learn the verdict in his case, but how will it all go down? Here's a look at what you can expect from the proceedings.
SHOW TRANSCRIPT

The verdict in Oscar Pistorious' murder trial is set to be handed down this week, bringing the lengthy and very public trial to a close.

Judge Thokozile Masipa will decide the verdict six months after the trial began and more than a year and a half since Reeva Steenkamp was shot to death. (Video via eNCA News)

Just like the rest of the case, the possible verdicts have gotten plenty of media attention, with The Guardian listing off all the possible outcomes while CNN opted to put them in a handy flow chart.

The charges against Pistorius, an Olympic sprinter, include the obvious charge — murder — as well as two separate charges of discharging a firearm in a public area — unrelated to Steenkamp's death — and a charge of illegal possession of ammunition. (Video via ITN Productions)

And South Africa's legal system doesn't use trial by jury, so the decision will ultimately be Judge Masipa's own. (Video via CCTV)

But exactly how she goes about making that decision, and how long it takes, doesn't appear to be set in stone.

SKY NEWS: "She'll go through all, pretty much all the evidence, summarize it all: all the main defense and prosecution points and then go through all the four counts and deliver that. ... Many of the legal experts I've spoken to, they think she'll leave it to maybe mid-morning Friday."

So despite any number of articles saying Pistorius will learn his fate Thursday, maybe don't hold your breath.

One thing that doesn't seem to be in question is the character of the judge — many have praised Judge Masipa.

BBC: "In an overwhelmingly white courtroom, Judge Masipa's quiet authority has turned her into an important role model in a country still wrestling with race and gender."

But the trial has cast a spotlight on South Africa's legal system — and maybe not in the most representative way.

As Voice of America reports, some analysts say the trial isn't like most South African trials. One researcher told the outlet: "We hear [about] terrible legal representation, the accused end up in jail based on flimsy or non-existent evidence that isn't sufficiently challenged in court, days upon days of remands for no reason. … [It] is definitely not the situation most people face."

So whether the final verdict is delivered Thursday or Friday, those are reportedly the only two days the judge has allocated, so Pistorius' fate will be decided by the end of the week.