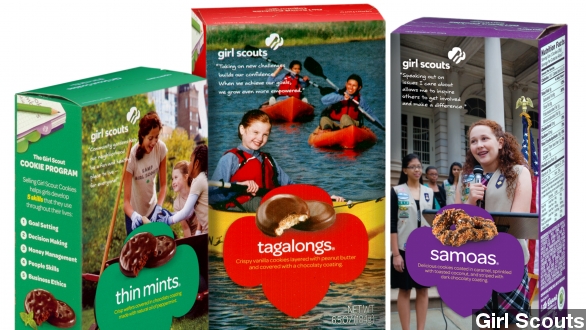 By Jasmine Bailey
December 1, 2014
Girl Scouts has announced it will allow customers to order cookies online in January 2015.
SHOW TRANSCRIPT

You can run, but you can't hide from Girl Scout cookies— not even if you actually wanted to.

Monday, Girl Scouts of the USA announced Thin Mints, Tagalongs or any other of America's longtime favorites will just be a click away.

"It's a new program called Digital Cookie; isn't that clever?" an anchor for HLN said. "And the proceeds will still benefit local communities."

The organization's chief communications executive told USA Today digital adds another layer to the tradition methods, which began in back 1917. (Video via MSNBC)

"We are girl-led and girl-driven. We go where girls are, and girls are digital natives. ... The digital component will enhance the sales, and the byproduct will be a larger social imprint from the girls."

And the move is expected to help bring in a good chunk of change for the organization, too, which already makes about $800 million from booths, order forms and door-to-door sales.

A majority of the more than 100 councils across the country are currently testing the idea. So how does it work?

Each scout will have her own Web page — that means you can choose who you want to buy from, no matter what state you're in —which is perfect for long-distance family members. But the catch is you must receive an invitation via email in order to access a specific scout's page.

"GSA says it's making the move to get girls interested in email, marketing and financing and online communicating at a younger age," a reporter for WPMT said.

The Girl Scouts also have a mobile app on iTunes and Google Play that you can use to find where nearby cookies are being sold. The boxes will then be delivered right to your doorstep. Geez, this might be making it a little too easy to fill that sweet-tooth craving.

"That is too easy, Jill," one CBS anchor said. "At least when you get them at work you have to share them with your co-workers."

The organization will still keep its older methods of sales, but digital is expected to be implemented nationwide in January.