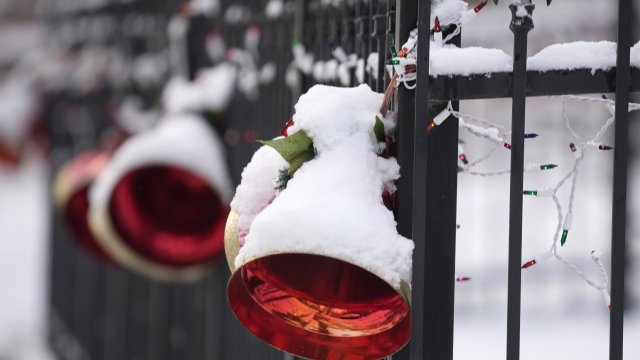 SMS
Thick Snow Impacting 9 States Amid Plow Driver Shortage
By Scott Withers
By Scott Withers
December 10, 2021
A significant shortage of snow plow drivers across the country may mean the roads won't get cleared as fast as usual.
SHOW TRANSCRIPT

A winter storm is impacting nine different states, and it's already piling up some big snow totals.

Utah's Department of Transportation had snow plows out Thursday night. In Parley’s Canyon, the snow was so thick it was hard to see driving. It was falling about two inches per hour, racking up more than a foot of snow in the mountains.

The storm covered the Rocky Mountains and western Colorado, and the heavy snow created avalanche warnings through the states mountain range.

The storm system is stretching up in to Wyoming then started to move east across northern Nebraska and South Dakota. Still moving east, it's bringing heavy snowfall to Iowa, southern Minnesota, across Wisconsin and Michigan.

A significant shortage of snow plow drivers across the country may mean the roads won't get cleared as fast as usual.

In Montana, they need 90 plow drivers.

It's part of the pandemic problem — people just don't want to drive the plows at odd hours in dangerous conditions.

The winter storm will bring freezing rain to Minnesota, Wisconsin and Michigan on Friday night.

A tornado and severe thunderstorm threat on Friday night will last into the early morning hours on Saturday.

The risk of possibly strong tornadoes stretches from the Mississippi River up through the Ohio River valley.

Back out in the Rockies, it's snowing significant amounts in Denver after 233 days of no snow.

There will need to be at least a tenth of an inch at the airport for it to be official, but it seems unlikely Denver will break the snow-free record set back in 1887.