These Simple Steps Can Make You Internet Famous 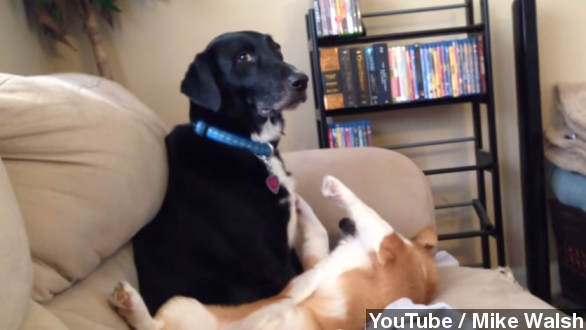 If you've ever wanted to go viral — you know, make a video that everyone and their brother watches, loves and shares — look no further.

--Animals: Self-explanatory, but especially if you have a cat ... #InternetGold.

--Kids: Preferably if they're doing or saying something hilarious or wildly inappropriate.

--Parodies: Make a parody of something that's already famous.

--Surprise: Somehow manage to capture an event no one saw coming ... or just have a camera rolling 24/7.

We spoke to two viral animal masters themselves.

Mike Walsh, the man behind Neville Longbottom the corgi.

And Byron Gatt, who has brought us such masterpieces as telekinesis cat.

As for another viral superstar, Hunter Wolk is behind the "Girls Are Assholes" series. He and Yael Zinkow write the comedy sketches that involve ... well, we think you get it.

And Hunter says nobody likes a long viral clip. Imagine your viewers having the attention spans of a ... Oh, look! A squirrel!

"Make it short. ... Imagine how long you spend watching a video before clicking it off and then just understand that everybody else is going to be doing the same thing. Everybody's like ... a video is two minutes?! F*** that. ... People don't have attention spans anymore, so you really just have to cut it down to its core essence," Wolk says.

OK, so you've posted your first video across social media platforms. Here are some other tips to make it go viral:

--Keep posting. Make more than one video. Don't be a one-hit wonder.

--Once you make a vid, seek out people who have the same interests.

Especially that trolls part. Don't let them get you down; you just keep doin' what you do.

"It's funny to me, though, because people will — I guess I should know this already — but on the Internet, will find anything to complain about. So it was like a cute animal video, and then they were making comments about President Obama. So then I was joking with my wife, I was like, 'Yeah, Neville is a puppet of the liberal media,'" Walsh says.

But our ultimate tip: "Call in a lot of favors and get a lot of pizza," Zinkow says.

'Cause who can say no to pizza? We can't.