These NFL Teams Look Terrible, And It's Only Week 5 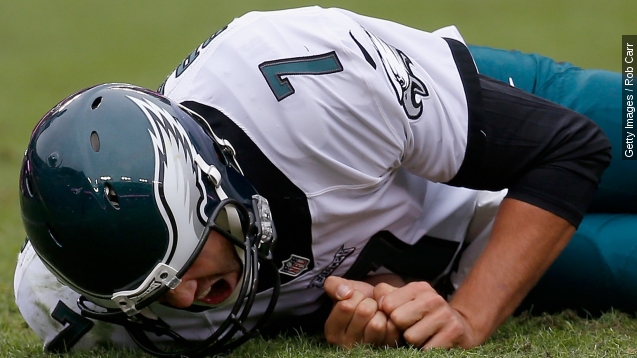 SMS
These NFL Teams Look Terrible, And It's Only Week 5
By Matt Moreno
By Matt Moreno
October 6, 2015
A handful of NFL teams are off to rough starts this year and may want to start thinking about next season.
SHOW TRANSCRIPT

We're entering week five of the NFL season, and some teams are looking forward to it more than others.

The list of teams in total disarray certainly involves some of the usual suspects, but there are surprises in the list, too.

Like the Philadelphia Eagles: The Chip Kelly experiment isn't exactly going as planned. (Video via Press of Atlantic City)

"From trading LeSean McCoy, letting Jeremy Maclin walk in free agency, trading quarterback Nick Foles for Sam Bradford. And everyone is resolute in believing that Chip Kelly has a plan — even though they're not 100 percent sure what it is," ESPN's Ashley Fox said in May.

After bringing in Sam Bradford at quarterback and DeMarco Murray to lead rushing efforts, the Eagles are off to a 1-3 start. And Murray is none too happy about his role in the whole thing.

The San Francisco 49ers aren't looking much better. Everyone knew things would be different this season after the bitter departure of former head coach Jim Harbaugh, but the season is not off to a great start. (Video via KNBR)

And much of it comes back to quarterback Colin Kaepernick, who is struggling mightily. He's thrown two touchdowns and five interceptions through four games and has eclipsed 165 yards through the air in a game just once.

"How much blame goes on this coaching staff? He had a lot of success under Jim Harbaugh," another analyst said.

In the AFC, the Kansas City Chiefs came in looking for their third-straight winning season under head coach Andy Reid, but some unfortunate timing is putting that in jeopardy.

"Looks like the Chiefs season is in shambles right now. They're 1-3, but their season's not over. First of all, their three losses came to teams that are combined 12-0," KSHB's Frank Boal said.

Now, this isn't to say these teams are down and out for the 2015 season already — there's still plenty of football to be played. Plus, the 2011 Super Bowl-winning New England Patriots started off 1-3.

But that won't be easy for these teams to replicate. According to PlayoffStatus.com, the Chiefs and 49ers have just a 2 percent chance of making it to the Super Bowl; the Eagles sit at 1 percent.