These McDonald's Cheese Sticks Were Missing Something ... Cheese 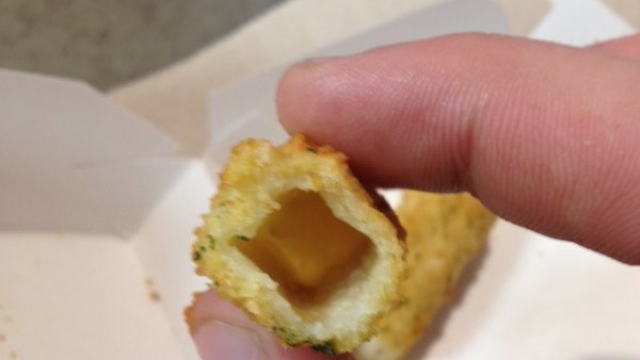 SMS
These McDonald's Cheese Sticks Were Missing Something ... Cheese
By Samantha Crook
By Samantha Crook
January 29, 2016
A few McDonald's customers discovered that some of their mozzarella cheese sticks were empty and let the company know about it on Twitter.
SHOW TRANSCRIPT

"Made with 100 percent real cheese," a McDonald's advertisement said.

There was something missing in some of McDonald's new mozzarella sticks — cheese.

In a statement to WMAQ, the company apologized for the awkward slip up.

It said, in part: "We are aware of a low volume of guest concerns about our Mozzarella Cheese Sticks. ... We believe the cheese melted out during the baking process in our kitchens and shouldn't have been served."

McDonald's said it was fixing the problem.

One customer told Newsy the company sent her free coupons for new mozzarella sticks. Hopefully they have cheese in them this time around.