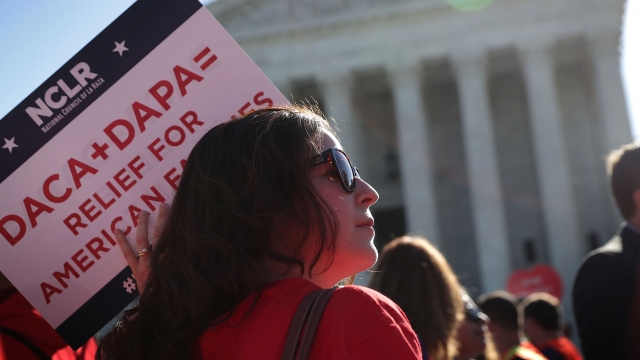 SMS
These Mayors Want Trump To Keep DACA And Protect America's Dreamers
By Karen Rodriguez
By Karen Rodriguez
December 7, 2016
Lawmakers fear Trump could use the information Dreamers provide on their DACA applications to deport them.
SHOW TRANSCRIPT

Sixteen mayors signed a letter asking Trump to keep the Deferred Action for Childhood Arrivals program, or DACA. The program has stopped the deportation of nearly 742,000 so-called Dreamers who arrived in the U.S. before turning 16.

The Obama administration started DACA in June 2012. It lets undocumented immigrants who entered the U.S. as children — among other things — apply to defer their deportation every two years.

But Trump recently told TIME, "I want Dreamers for our children also. ... We're going to work something out that's going to make people happy and proud."

The letter is just the latest effort lawmakers have made to protect Dreamers.

"We promised these recipients security, and now they are facing a nightmare," California Rep. Judy Chu said.

Senators Lindsey Graham and Dick Durbin are currently working on a bipartisan bill to protect Dreamers from deportation.

And a group of House Democrats is urging President Obama to pardon the Dreamers. But the Obama administration insists immigration violations don't fall under the scope of presidential pardons.