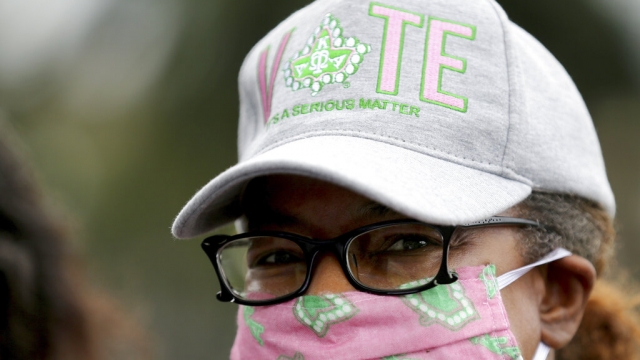 While final numbers won't be available until later, early results suggest nine out of 10 Black women voted for Joe Biden.

From leading the conversation at the Democratic National Convention to the sorority push, women of color have been hard to dismiss this election.

“What happened in 2016 is the Democratic Party took us for granted, didn't do a specific outreach, [or] embrace a lot of the issues very important to us. And although our percentages were high, our numbers were not, and we wanted to correct that, “ Aimee Allison, founder of She the People, told Newsy.

In 2018, Aimee Allison founded She the People to help get women of color to the polls, lasering in on states where Black women could sway the overall vote.

“We are writing a history of a Georgia where we prosper together,” said former gubernatorial candidate Stacey Abrams in 2018.

Something else happened in 2018: Stacey Abrams.The fact that the reliably red state of Georgia is headed to one, possibly two, Senate runoffs is being credited to the former gubernatorial candidate who lost her election bid two years ago.

After the loss, she formed Fair Fight, a group that works to combat voter suppression.

“She offered a new playbook. She ran her gubernatorial campaign with that playbook by early investment in not only the engagement of people of color, but bringing in and inspiring voters and assembling a multiracial coalition,” said Allison.

But she wasn’t alone. Allison says minority women across the country were getting out the vote.

“I feel like a job well done. Like I did my part. I think we all did our part,” said Maya Guy.

Earlier this year, Newsy spoke to Maya Guy, founder of Suburban Women for Kamala Harris. Her group amassed more than 216,000 members and raised $22,000 for the campaign in a matter of months -- a modest amount, but one that demonstrates grassroots support.

The mother of five says the realization that Harris could be the first Black female vice president isn’t lost on her.

“I feel like it's about time. I think it's actually ridiculous that it took this long. The standard should have never been White male and privilege, and that has been the standard,” said Guy.

In the history of this nation, there have only been two Black women senators, one of them Harris. Guy and Allison say the country has a lot of work to do with Black women in leadership roles, but this is progress.  Amber Strong, Newsy, Northern Virginia.