These Brothers Are 2015's Top Donors. They're Not The Kochs 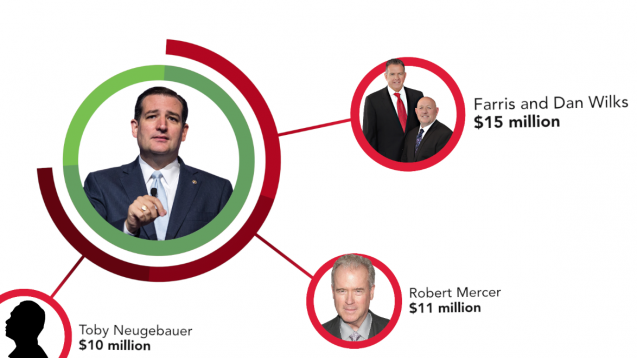 SMS
These Brothers Are 2015's Top Donors. They're Not The Kochs
By Zach Toombs
By Zach Toombs
September 17, 2015
The Wilks brothers made their fortunes in oil and gas. Now they're pouring some of it into Ted Cruz's campaign.
SHOW TRANSCRIPT

The biggest donors in the early race for the White House weren’t the Koch brothers. But they are brothers — and they too are in the oil and gas business.Together, Farris and Dan Wilks poured $15 million into the campaign in summer 2015. That was more than any single donor. And all of that went to super PACs for Ted Cruz.

They’ve pledge to sink $1 billion into the election through their political network when it’s all said and done. But the Wilks brothers have a decidedly milder persona.

The Wilks are also deeply religious, which they say is why they’re supporting Ted Cruz. The brothers list abortion and gay marriage as top issues — along with small government. They told CNN, they want “A leader that will stand up for biblical morals.”

The Wilks gave a large part of the early money raised for Cruz. Almost all of the $38 million raised for his super PACs came from the Wilks and two other donors: Robert Mercer and Toby Neugebauer. Each of them gave at least $10 million.