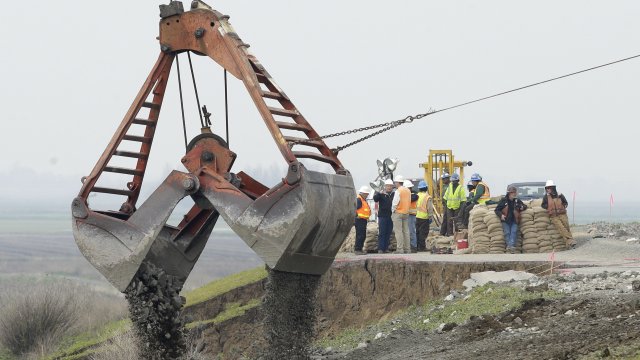 The U.S. levee system — once considered the second largest piece of the country's infrastructure "rivaled only by the highway system" — is now nearly a century old and failing inspections far more often than it passes them. Only one in 25 federal levees are rated Acceptable.

Newsy's data analysis of the National Levee Database in the spring of 2020 focused on two things: the status of the overall infrastructure and finding the nation's most vulnerable levees.

In the federal portfolio of levees, the most common inspection rating is Minimally Acceptable (57.1%). It means at least one part of the levee doesn't meet standards, but should survive a flood. Unacceptable ratings (38.7%) — meaning the levee isn't expected to perform as intended in a flood — are far more common than Acceptable ratings (4.2%).

This trend is true across all types of levees, regardless of whether the federal government or locals built and maintain them.

Since Newsy pulled this data, the Army Corps of Engineers removed inspection results from its public database. The Corps explained this saying it's moved away from those ratings and one or two-word descriptions of a levee's condition were causing confusion. It now prefers custom descriptions that break down risks for individual levees. Regardless, the average person doesn't have access to inspection results of levees protecting their homes.

We focused on the 73 levee systems that were both rated Unacceptable and have been designated by the Army Corps of Engineers as being High Risk or Very High Risk. The Corps says nearly all of them have fixes either underway or in planning stages, though fixes often take years or decades.

Those systems can be found nationwide, from the Sacramento region in California to the south Florida seaboard; from Appalachia to North Dakota to the Mississippi River Valley.

And the people who maintain those vulnerable levees say their problems are remarkably similar: systems that are too old and far too expensive for locals to fix, much less replace.

Brian Bracey, the executive director of the Water Quality Board in Huntington, West Virginia, says he has sleepless nights thinking about the levee system protecting the city.

"We jokingly, around with our staff and our senior leaders here, have said we should get T-shirts that say, 'Build our wall,'" says Bracey.

Huntington — a city where nearly one-third of residents live below the poverty rate — has one of the oldest large-scale levee systems built on the Ohio River. Bracey says the city struggles just to operate its infrastructure from the 1940s. Repairing or replacing it can't happen with local money alone.

Joseph Countryman, a member of the Central Valley Protection Board in the Sacramento region, says the problem is nationwide and worsening. California has pumped hundreds of millions of dollars into the region's levees after a devastating flood and dam collapse in the mid-1980s, but he says the improvements aren't close to enough and red tape slows progress.

"The funding just isn't there," says Countryman. "If you're behind a levee, you're in a dangerous situation. And you should take it seriously and do what you can, but realize if you're going to count on the federal government, you're going to wait. It's not going to happen tomorrow."

While there have been bills introduced in Congress to change how the Corps can manage certain rivers, there is no major effort to repair or replace U.S. levees on a mass scale.

Bracey, Countryman and other local levee officials don't see that changing until it's too late for someone — much like when Hurricane Katrine devastated New Orleans in 2005 and caused a massive paradigm shift in how emergency management officials think about flood protection.

"These are just itty bitty individual pieces that are placed all throughout the United States," says Bracey. "But it's time to look at them holistically. It's time to take them all into consideration."

"I don't see it happening," says Countryman. "Until a catastrophe happens."