Theresa May Says There Won't Be A Second Brexit Referendum 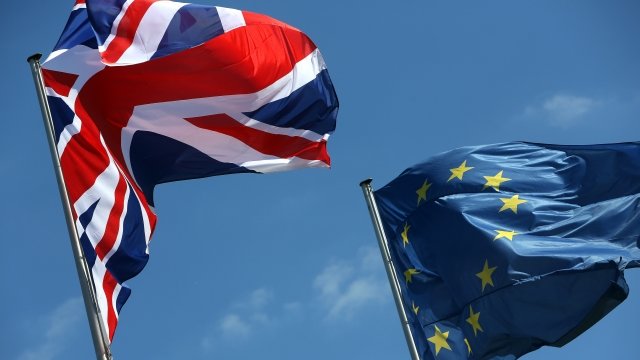 SMS
Theresa May Says There Won't Be A Second Brexit Referendum
By Katie Cammarata
By Katie Cammarata
September 2, 2018
The U.K.'s prime minister also said she wouldn't compromise with the EU during Brexit negotiations.
SHOW TRANSCRIPT

U.K. Prime Minister Theresa May says there won't be a second Brexit referendum.

She wrote in The Telegraph on Saturday that a second referendum would be "a gross betrayal of our democracy." May also said that she won't compromise with the European Union during Brexit negotiations.

U.K. leaders agreed to a Brexit plan in July, and the government published its 98-page so-called "white paper" not long after. The plan addresses items including using a "common rulebook" to allow the free trade of goods between the U.K. and EU, and giving the U.K. more control of its border.

But May says there's been "real progress" in negotiations since the deal was made.

The U.K. government also has a back-up plan in case it can't strike a deal with the EU by the time it plans to leave in March.